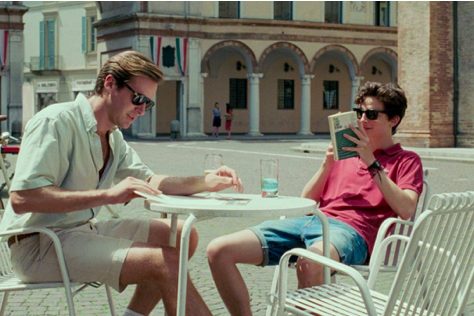 The UK is in the midst of a heatwave and as lovely as that is, this country is not built for it and surprisingly enough, neither are most of our wardrobes. The UK isn’t known for its long, hot summers and constant 30 degrees, so when it does come around, it’s a shock – and the first thing we all wonder is: what do I wear in this unrelenting heat?

Now, we all know that inspiration can be taken from anywhere. Just open Instagram and you’re bound to see an outfit or two you’d like to try, but let’s be realistic, we can’t all dress like Kanye West (thankfully). What we can do however, is turn our attention to the medium of film, and see how these cool, line-learning folk dress when shooting in the middle of Italy. That is why my outfit inspiration for Summer 2021 comes from the heavily talked about film, Call Me By Your Name.

You can thank the 1960’s for the explosion of the band t-shirt, and I for one am very thankful they stuck around. The beauty of Elio’s here is the fact that it’s not only a fantastic band choice but  also slides excellently into the super-wearable piece we should all be adopting in the warmer months. Don’t just rely on bands though, every brand will do a logo or graphic tee, all great choices. If you do pick up a band tee, however, make sure you actually like the band, it’s easier.

Stripes are the only pattern you’ll need

Summer is all about pattern and print, and if you can’t wear it when it’s warm, then when can you? The beauty of the humble stripe is that it comes in a hundred diﬀerent colour ways and in Elio’s case, without sleeves. Keeping it subtle on the pattern allows the rest of the outfit to follow suit and the whole thing ends up looking cool and considered. Do love a floral print though.

Short shorts should be embraced

I’m not talking skin tight, I’m also not talking middle-aged man in the park wearing the same shorts he bought in the 70’s. I’m talking light, floaty numbers in simple tones. Oliver works this perfectly here, allowing it to act as an under layer for his long sleeved, oversized Oxford shirt and paired with a pair of white trainers. Shirt or t-shirt, I’m not too precious about, but as long it’s oversized and airy, you’re away. Promise me you’ll attempt this.

Oliver’s outfits during the whole film scream understated, but don’t be fooled by that, the devil is  in the detail. Earthy tones and hues make up the bulk of his fashion choices, take this one for instance, straight cut beige shorts and a mint green short sleeved shirt, all neatly tucked in with a brown belt. Very preppy and very cool, easy.

One of the things Oliver does showcase in the film is a wonderful collection of Oxford shirts. For me, they look their absolute best when worn casually, and that’s the beauty of summer, everything should be eﬀortless. Going up a size allows for the shirt to hang a little rather than hug you, and popping a few buttons allows the breeze to cut through, and also show of that new necklace  you’ve been hiding under a jumper since Christmas 2020. Play around with colours, textures and patterns, try it tucked and untucked and realise how versatile a simple shirt can be when worn  well.