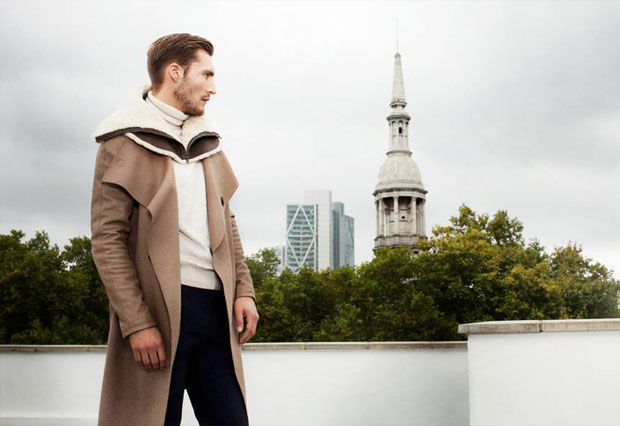 As the turn of the season approaches, it is worth giving some thought to the pending wardrobe rejuvenation, which will see men everywhere wrapping up in defiance of the cold winds that are to soon to swoop in and replace the beloved summer sunshine. An antidote to the mourning of those brighter days, statement outerwear that boasts colour and promises any look an impressive dose of pizzazz is the trending look tipped to become a must-have staple.

The importance of a great coat has long been beyond dispute: although the last thing one puts on, it will always be the first thing seen. What’s more, an overcoat will normally conceal so much of an entire ensemble that it has a greater duty to work independently, unable to rely on the layers beneath. An impeccable choice of this key piece is therefore paramount to expressing one’s individual style, in keeping with an idiosyncratic interpretation of an inevitable fashion code. In short, it is a question of making a statement, but more importantly the right statement. The genius behind such a vaguely defined trend as “statement outerwear” is that the statement and thus the style is for each man to determine himself.

There is a lot to be said for the way something feels. And equally, a lot to be said about the way something looks because of the way it feels. For those who lean towards a more classic, understated and less in-your-face, look-at-me, bold approach to piecing outfits together, playing with texture will serve as an appropriate outlet for exercising this trend. Dramatically soft or overtly hard and “edgy”, an eye-catching textile works well as part of a grown-up, monochromatic look, where the onus is placed on a sleek, intelligent pairing of fabrics within an altogether chic ensemble.

Colour is, of course, the most obvious way to make a scene, as it were. Coats are so often typically designed in neutral shades that a bold choice of colour – be that bright or even eccentric, or rather rich and a luxurious step-up from the sea of blacks, greys and browns available – will accordingly tick this trend’s box. The important thing is to opt for a tone that compliments your complexion and will work for you, whether then teamed with black or grey – so that it pops, as the cliché would have – or with loud, jazzy prints. (N.B. prints should complement the colour of the coat, even if in a cleverly ironic, clashing juxtaposition fashion). Particularly high on trend lists this season is the delicious dégradé – the two-tone blend which stands out as a vast improvement on the tired tie-dye technique. Colour your life, lads.

The market currently boasts a plethora of prints, with something to suit everybody’s tastes. Think longevity on this one: a coat really is a wardrobe staple and should be able to work with a majority of your outfit options. The most sensible choice would be something that can both sit well on its own, against a plain palette (most probably of black, for ease), or in a clash to rival that of the Titans, as is perfectly à la mode. A sophisticated stripe against a check, or iconic Prince of Wales against houndstooth. Mix up the prints and turn up the volume for this statement-shouting look.

This trend comes at the peak of a greater trend: an increasing number of men readily donning pieces that make big, bad, bold statements. And how colourful and bright are streets are for it. Jump on the bandwagon – by all means – but be mindful not to fade into a sea of silliness. Coats can and should boast somewhat more longevity than certain other seasonal pieces. Be careful and considered in choosing the coat, and feel confident that any statements being made still resonate with an intelligent, well articulated sense of style.