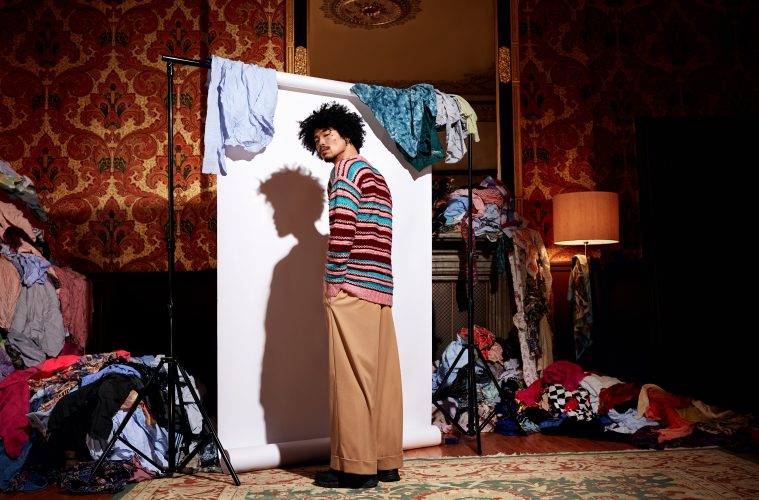 Vanish and The British Fashion Council Launches The Rewear Edit

Thought-provoking new imagery launched during London Fashion Week raises awareness of the growing issue of clothing waste in the UK and its devastating impact on the environment.

● New activation raises awareness of 350,000 tonnes of clothing destined for landfill each year in the UK

● An arresting new film follows the development of the Rewear Edit, a fashion shoot created using 3.5 tonnes of discarded clothing salvaged from waste sites across the country – equivalent to the amount thrown away every 5 minutes

● Comes as a new study from Vanish reveals 64% of consumers wear an item of clothing only once, admitting to disposing of clothes simply due to minor issues such as faded colours (22%) or stains (20%)

● Nearly a quarter (23%) of UK consumers discard or never wear an item of clothing again due to boredom, revealing a shockingly casual attitude towards clothing

[Monday, 22 February 2021]: Today, Vanish reveals the Rewear Edit: a fashion shoot created entirely from clothing waste. Featuring looks drawn from the refuse pile and curated by renowned stylist and sustainability advocate Miranda Almond, the Rewear Editshoot took place against a backdrop of 3.5 tonnes of clothing waste – the same amount discarded every five minutes in the UK. The shoot has been designed to raise awareness of the nation’s throwaway mindset; a behaviour that sees 350,000 tonnes of clothing sent to landfill every year.

Featuring everything from classic black dresses, sharp tailoring, chunky knitwear and conceptual denim, the Rewear Edit shoot launches at London Fashion Week to encourage everyday consumers to embrace more sustainable ways to care for their clothes, knowing single-use clothing costs the UK consumer £2.7bn each year on clothes that will only be worn once before being discarded. The activity is part of Vanish’s sponsorship of London Fashion Week, aimed at inspiring and raising awareness of the importance of mindful fashion to consumers.

New consumer research commissioned by Vanish displayed throwaway attitudes towards fashion, with over two thirds (64%) admitting to wearing an item of clothing just once, and half (50%) owning an item they have never worn. When asked what they’ve done with their unwanted clothes, nearly a third (31%) admit to disposing of items at a clothes bank or throwing them in the bin (16%), rather than considering more sustainable routes such as rewearing or sharing with friends and family.

Delving into the findings further, Vanish discovered a shocking number of consumers confess to disposing of or never wearing items of clothing again due to minor issues, such as faded colours (22%), stains (20%) or minor damage (19%) – all issues that could be easily overcome. Additionally, nearly a quarter (23%) of consumers confess to discarding or never wearing an item of clothing again as they got bored of it, revealing a shockingly casual and mindset towards their wardrobe. The research also revealed more than a third (34%) of people admit to buying clothes in the spur of the moment, only to change their mind later. What’s more, they are often unaware of the effect of this behaviour, with clothing placing fourth after housing, transport and food items in terms of presumed impact on the environment.

A short film capturing the process of creating the Rewear Edit follows renowned fashion stylist Miranda Almond as she creates new looks from items discarded too soon, learning about the consequences of this throwaway mindset in the process. The film sees them bring their reimagined looks to life in a stunning, yet confronting, fashion shoot, as the models showcase the looks against a sea of 3.5 tonnes of clothing waste. Showcasing simple adjustments and styling tricks to breathe new life into unloved clothes that have barely been worn, the Rewear Edit demonstrates that with a little bit of imagination and consideration, a whole raft of new and exciting looks might be just an arm’s length away.

Cigdem Kurtulus, Chief Marketing & Digital Officer for RB UK & Ireland said:  “What we wear allows us to really express ourselves and our identities. Here at Vanish, we know just how important the right clothes are. We launched the Rewear Edit to demonstrate the sheer potential that sits in items that we throw out without a second thought. We want to encourage the nation to look at their wardrobe in a new light.”

Fashion stylist and sustainability advocate Miranda Almond said: “Before you go out and buy something new, before you throw away that item that’s been unloved and unworn lying in the bottom of your wardrobe, think again. With a little imagination, love, and restoration that item can be reworn and reimagined to have a super stylish second life. Think about rewearing as the most timeless style statement yet!”

The launch forms part of Vanish’s partnership with the British Fashion Council (BFC), within the brand’s global mission to promote let clothes live many lives, in turn promoting responsible clothing production and consumption. The partnership, which sees Vanish become an Official Partner of London Fashion Week, will undertake research and support consumer education to establish sustainable fashion behaviours including wearing clothes for longer, buying pre-loved garments, and re-purposing and recycling clothes in our wardrobes.Vanish is also a Founding Partner of the Institute of Positive Fashion, the BFC’s recently formed initiative which aims to help the British fashion industry become more resilient and circular through collaboration and action.

In addition to the sponsorship of London Fashion Week, the alliance will also see Vanish:

● Conduct research as part of the IPF’s launch project, ‘the Circular Fashion EcoSystem Project’, to understand what it will take to create a viable circular fashion industry in the UK

Caroline Rush, Chief Executive British Fashion Council said: “As the world turns its attention to the incredible collections at this year’s London Fashion Week,  our partnership with Vanish is here to remind people of the joy of restyling and reimagining their wardrobes and to give their clothes the lifespan they deserve. We are dedicated to working with Vanish to explore positive consumption for a more sustainable world.”As a garment care brand whose mission it is to help clothes live many lives, Vanish is committed to using its reach in 69 million homes and partnership with the BFC to persuade consumers to adopt environmentally-conscious behaviours in the buying, wearing, caring and disposing of clothes.

Watch the creation of the Vanish Rewear Edit and learn how choosing to love your clothes for longer will help ease environmental impact HERE.