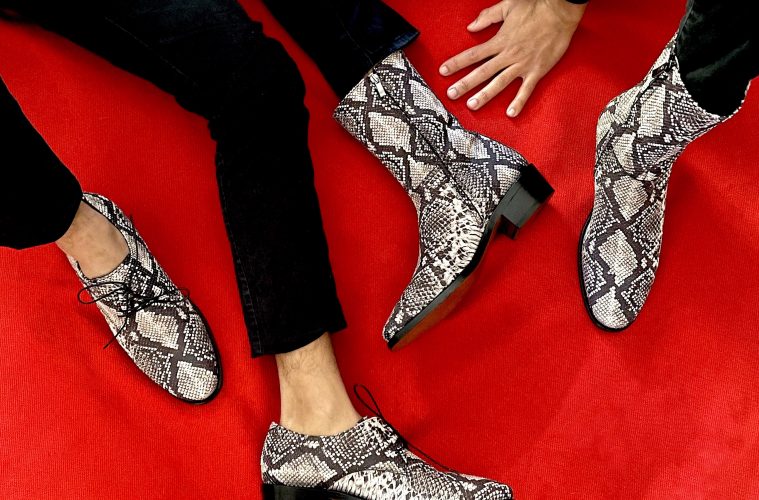 Mark Schwartz is the former creative director for Roger Vivier and over his 37-year career as a footwear designer has graced the top fashion runways of Milan, New York and Paris as well as front covers of magazines such as Vogue.  Over the years he has had the privilege of collaborating with fashion houses Gucci, Chanel, Balenciaga, Ralph Lauren, Marc Jacobs and Hermes to name but a few, as well as creating bespoke footwear by request for celebrities including Madonna, Oprah, Lady Gaga, Katy Perry, JLO and former first lady Hilary Clinton, plus many more.

Having spent years being mentored by his good friend and artist Andy Warhol and having been known as the prodigy of Roger Vivier, Schwartz has decided to move away from his signature 4 inch ladies’ heels to launch a stylish and dynamic range of men’s shoes.

All his men’s shoes are hand made in Florence, Italy with Mr Schwartz overseeing every stitch to create the perfect custom men’s shoe.

Schwartz is known for paying special attention to the actual heel detail, having been a woman’s shoe designer he recognises how crucial heel shapes and placements are to the comfort of a shoe.  The heel of a trademark Mark Schwartz men’s shoe is unique in that like a woman’s shoe the heel is attached separately, with space around its base. This gives his shoes a feeling of walking on air whilst still allowing his unique designs to remain stylish, current and masculine.

His latest collection, “The Marquis Collection” is a collaboration with British born actor, musician and radio host, The Marquis Michael Des Barres whose French nobility lineage and title can be traced back 734 years. Des Barres is well recognised for his role as Murdoc in 80’s TV show MacGyver as well as shows like Melrose Place, JAG, Rosanne, NCIS and CSI. He also made an appearance in the original Miami Vice series where he was asked to do a cameo as himself.

Furthermore, he was cast in cult movies, classic films and big pictures, such as Diary of a Sex Addict, To Sir With Love and has acted alongside Clint Eastwood in Pink Cadillac. Des Barres is famously known for replacing Robert Palmer as frontman and lead singer of the band Power Station when Palmer pulled out at the last minute before Bob Geldof’s 1985 global benefit concert, Live Aid. So impressed by him, Led Zeppelin founder and lead guitarist, Jimmy Page, personally approached and signed Des Barres to his label Swansong Records.

“I am extremely excited about this collaboration with Michael. He has been extraordinarily hands on and inspirational, and he never ceases to feed and inspire me creatively” says Schwartz.

Like Marquis Michael Des Barres, “The Marquis Collection” is for the discerning gentleman, who is not afraid to stand out from the crowd and be noticed, yet oozes class, unique style and charisma with a little cheeky playfulness on the side.

Des Barres says “These boots were made for dancing! Even while standing still. Style is merely individualism. In this challenged world, step out & stand for love, literally!”

With the constant reference to the gender blurring ‘70s on catwalks and red carpets around the world, this era has been a significant influence in many designs this season and together Schwartz and Des Barres have managed to create something that explores this in a way that remains potently masculine yet stylishly outlandish and sleek. “The Marquis Collection” explores sumptuous prints, leathers and fabrics paired with a fashionable higher, more modern take on the classic Cuban heel. The collection comprises of the “Piccadilly” shoe, the ”Carnaby” ankle and the “Soho” calf boot each with a custom 40mm heel. First to be released is the Roccia snake skin leather print with new colours and fabric to follow each month.