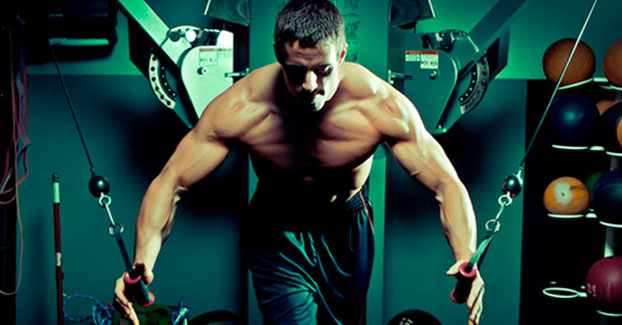 Bodybuilding is dead. The era of lifting weights for competition is coming to an end.

Now, more than ever, gym-goers are training purely for aesthetics. They want to look leaner, bigger, stronger and more handsome.

So what has brought about this change? What has inspired today’s youth to focus on physical appearance, instead of overall strength?

Without doubt, celebrity culture has always favoured a perfect mans body for advertising campaigns. It was only a matter of time before it caught up with us.

Brad Pitt in Snatch, David Beckham in…anything he does. These torso’s have become iconic, been lusted over by women, and now coveted by Men.

The sport of Bodybuilding is very much alive, but the percentage of people seriously training to become an athlete, versus those just training to look good has tipped in the favour of the aesthetic.

Both goal bodies can be neatly separated into two different groups. Aesthetics and Massthetics. To achieve a beautifully proportioned body, vs achieving incredible size and muscle density.

Obviously there are many followers of both, and some believe that their body, or target is greater than that of their peers. The difference being that their is no real way to judge. It’s all based on personal opinion and experience. Do Women really love big biceps? I’m sure some do, but the truth is, Women aren’t as shallow as Men think.

At a primitive level, showing that we’re the strongest, healthiest mate is your way of securing a partner to carry on your genetic material into the next generation.

The REAL reason men do this is competition. Not for any prizes, awards or accolades. It’s simply to prove that they can master their own body, tame their cravings and create their own willpower. Competing with themselves to achieve greatness.

One goal is to get ‘cut’, to look good with a low body fat percentage. The other is to get big, build incredible muscle mass and look great.

Both end-results are incredibly hard to achieve, and as soon as you get involved in either, it has to become a lifestyle, otherwise you’ll only be disappointed in yourself.

Here at Mens Fashion Magazine, we train for aesthetics, and one of the first things you’ll need to do, is to define your goal. So to avoid sitting in the gym, looking at men intensely deciding which one you want to emulate…I’d suggest going online.

Two of my personal inspirations are Aziz Shavershian; known as Zyzz by millions of people all over the world, and Anthony Gonzalez; who became internet famous as @gonzalezfit on social media platform, Instagram.

Sadly Zyzz has passed away, but both men serve as a perfect example as to what can be achieved, if you live the lifestyle. If you master your body by upholding a perfect diet and training plan. No missed session, no excuses. If you want it, you have to work for it, and when I first started training at 23.5st, these Men were who I looked to for my target.

To match their diets, their drive and their intensity.

The internet has so much information on these days it’s easy to get lost and confused in who’s opinion might be right. However, both these gentlemen have an incredible amount to offer you, and the best bet, it’s all out there for FREE.

Okay, so you’ve chosen a side, you’ve decided on your goal, you’ve been inspired by Men you’ve never met to get to the gym, and you’ve been working hard. Now it’s time to show-off that body you’ve achieved with these summer essentials for the beach, pool and gym.

Nothing shows off the tear-drop Quads you’ve squatted tears to achieve, than these shorts. Inspired by 2eros swim shorts. These will be perfect for the gym, the pool and even the beach.