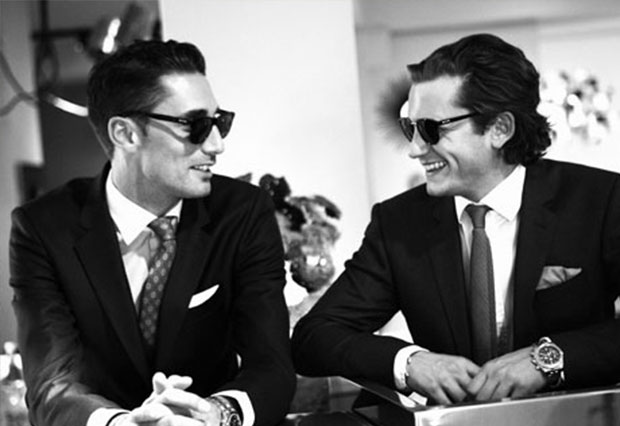 Taylor Morris is an eyewear brand built from passion. Put together by long-time friends Hugo Taylor and Charlie Morris, the brand represents luxurious British design with timeless elegance. The guys have just launched the unisex eyewear collection and have been put into the world famous Harvey Nichols store in Knightsbridge.

The range features six distinctive styles in 11 richly defined colours which have been flawlessly crafted to flatter the contours of the face and perfectly weighted for comfort. The unisex range includes the Saratoga Wayfarer, the Louis Orson and the Chelsea cat’s eye. Colours include caramel horn, black, white tortoise and blue speckled leopard, each featuring complimentary blue lenses.  Traditional textures find a contemporary expression with the finest materials and chicest colours.

Hugo Taylor, 27 and Charlie Morris, 23 have always shared an obsession for sunglasses. Owning countless pairs and labels over the years, the duo, one evening with drinks and a napkin in hand began sketching and creating what was to become the first collection of Taylor Morris eyewear. MFM caught up with the guy’s right before their launch in September.

Taylor and Morris have always had an affiliation with sunglasses and as Hugo jokingly admits “they were essential when I and Charlie used to come out of Chinawhite at 6am in the morning”. “No seriously, we’ve always worn and loved sunglasses. It’s the ultimate men’s accessory”. Hugo and Charlie managed to turn idea into reality very quickly but quality was never going to be compromised. Taylor added “we wanted to produce a collection that had no compromise with the level of manufacturing and quality with both myself and Charlie overseeing a lot of the production process first hand. At the same time we wanted an attractive price point to go up against similarly made frames that retail for £260 and ours start from £125”.

Charlie then started to talk about the inspiration behind the range. “We were influenced a lot by the timeless Hollywood glamour of the 1950’s. Guys like Steve McQueen, Bob Dylan, James Dean and John F Kennedy also inspired us. We were also inspired by British aviation and in particular Reginald Joseph Mitchell who we named our aviator frames after”. Modern day Taylor admits he’d love to get Johnny Depp in a pair of Taylor Morris,“ I saw Johnny Depp coming out of the Ivy restaurant the other week and he was the epitome of cool with his shades on smoking a cigarette”.

Here is MFM’s favourite frames from the range

Styled and inspired by the great British civil engineer Isambard Kingdom Brunel, famed for his innovative and revolutionary impact on Britain’s bridges and tunnels these glasses evoke the transformation he made to the country’s infrastructure using a strong keyhole shape on the nose bridge. The shape of the frame is designed specifically for those with strong facial features and is available in a caramel with black lens and a brown tortoise with mineral green lens.

Inspired by the curves and contours of the Supermarine spitfire of 1933 and the aeronautical genius Reginald Joseph Mitchell, THE Taylor Morris aviators have drawn inspiration from the universally recognisable aviator frame championed through the decades by actors and pop stars alike. Intentionally designed with a softer crescent to the under eye and rounder lens to give this iconic shape a modern day intricacy that still complements the golden era of aviation. The R J Mitchell frame comes in two colour- ways, a classic black with black lens and a yellow and black tortoise with mineral green lens.

Christened after one of the largest meteorites that crashed into the earth causing not only a 300km crater in South Africa but inducing volcanism and thus the world’s largest known platinum and gold reserves. Taylor Morris’ distinctive golden nose bridge is a nod to this event of 2 billion years ago. Uniquely unisex, this style of black frame on black lens evokes the style of Hollywood legends that has adorned the faces of many on screen icons such as Jack Nicholson, Steve McQueen and Elizabeth Taylor. The shape of these glasses combined with the attention to detail has been styled for those looking for the ultimate accessory for a smarter dress code.

All of the Taylor Morris eyewear collection is available online at www.taylormorriseyewear.com