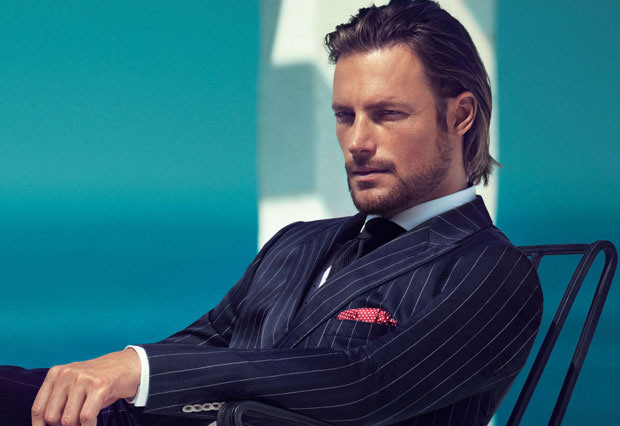 Every now and then we like to stray away from the glitz and glamour of the stars whose style we normally assess, and look to the men who are working within the finely tuned cogs of the fashion industry. These men are sometimes behind the scenes as editors or stylists, but it would seem that we may have missed out on looking at the guys who encourage us to buy the clothes; the models. These guys are the ones who become living clothes horses in order to try and sell us what they are wearing; it is a pretty effective way of selling. These hardworking gents spend a lot of time on their physical appearance which is (let’s face it) what this multi billion pound industry is all about. So in recent weeks there have been several news pieces going around looking at the top paid male models of 2013 and the gentleman to come on top of this list is Gabriel Aubry. The name may not ring a bell but the face most certainly will as he has been working as a model for approximately 10 years and featured in many campaigns such as DKNY, Valentino and even high street brand Next.

We often get questioned as to why we look at style icons who may or may not use stylists so therefore the style may not be their own. Well as far as we are concerned it isn’t just about the clothes you wear it is how you carry them. Not everyone can have a finely tuned sense of fashion; if they did then we certainly wouldn’t have any readers. Also it comes to a point where after so many years being styled and working in and around fashion that hopefully said style icon would have learned a thing a two. Gabriel Aubry is one of these gents, whom after working a model for ten years has most definitely learned more than a thing or two about how to dress. But it would also feel wrong if we didn’t look at some of his fashion campaigns too, after all these are what made him the highest paid male model of 2013.

Born to French-Canadian parents in 1975, the 6 foot 2; 38 year old model is at the top of his game. It is well documented that the older you are in the modelling industry the less work you are likely to get. Well this simply isn’t true for Gabriel as he has worked with many big names and still continues to do so. We also have to respect him for coming back from a very public and bitter custody battle over his child Nahla to Hollywood actress Halle Berry from 2010 until 2012. Also a very public and very brutal fight between Gabriel and Halle’s then fiancé (now Husband) Olivier Martinez caused much controversy as it was said that the fight was caused by Olivier threatening to kill Gabriel if he didn’t allow Halle and the child to move to France.

Despite such ordeals Aubry continues to do well, he also owns a successful restaurant called Cafe Fuego, located in the East Village of Manhattan on trendy St. Mark’s Place. In 2008 he also released an album name after his restaurant, which he also produced. He plays guitar on a selection of tracks and he has also been quoted as saying that the album was recorded to reflect the ambiance of the restaurant and is also “a delicate fusion of soulful sounds, highlighted with a world music flair, bossa-nova grooves and inspired by Latin and Cuban roots.” Respect is due for the man who triumphs over adversity and difficulty, but also respect is due for the man who carves himself a very successful career and looks super stylish and fashionable while doing it. Gabriel’s looks particularly when away from the camera reflect a cool ease and this represents a really nice laidback style. He seems to be a fan of blue jeans and simple tees paired with sunglasses, hats, cool jackets and trainers or boots. This kind of look is easy to achieve so check out a couple of our recommended looks based on Gabriel’s every day style.

Easy style is something we all love and it can be utilised by the use of layering which is always popular around this time of year. Gabriel embraces easy style and shows us how to do it well, it’s almost looking like you forget how good you look and in turn that brings about the air of easy and cool styling. However you chose to do it, try not think to hard about it because that can create a look that appear too try hard. Easy style should be easy, so take some style hints from Gabriel and utilise easy dressing this autumn.