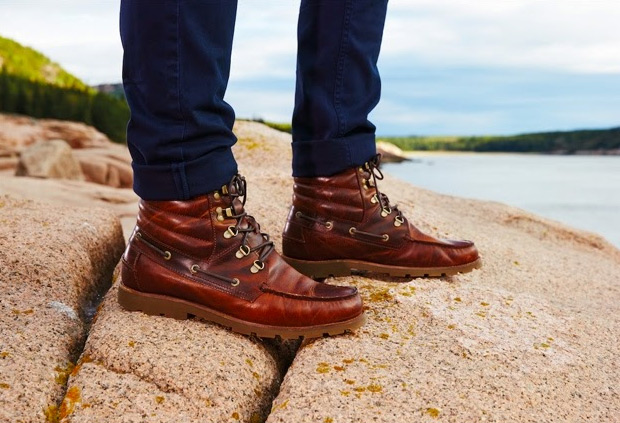 Footwear giant Sebago has released its Autumn/Winter 2014 lookbook to showcase its latest collection. While the footwear is both modern and bold, the range is able to remain true to the brand’s key concepts.

According to the company, the collection is ‘a celebration of everything New England, where we are nautical in our traditions but deliver a future of performance and ingenuity.’ While Sebago is mindful of its legacy, it continues to strive to move forward.

As a result, Sebago’s collection achieves a classically understated look, while also hitting the latest men’s style briefs. The shoes are very versatile, and can be worn at all times: they are perfect for on the street, on a night out or in the great outdoors.

Sebago has been creating authentic and timeless designs since its foundation in 1946. The Sebago-Moc Company was founded by New England natives Daniel J. Wellehan, William Beaudoin and Joseph Cordeau.

Four years later, the company’s sales had reached an impressive $1,000,000. Sebago-Moc’s first shoe was the hand-sewn penny loafer, styled after the popular Indian moccasins of the time. This shoe would go on to become the company’s patented welt construction.

Sebago-Moc went truly international in the 60s, when Sr. Francisco Gaudier purchased a pair of the company’s classic loafers in Switzerland and, impressed, signed a contract to distribute the footwear throughout Europe.

Following this, Sebago-Moc shoes were unveiled at Semaine du Cuir, the international exhibition in Paris. In 1970, Sebago-Moc introduced its own branded boat shoe by the name of Docksides. Soon after, the company dropped the “Moc” from its name, becoming the brand known today as Sebago.

Today, Sebago sells both authentic classics and innovative new footwear to over 85 countries. You can view and purchase the company’s footwear at http://www.sebago.com/UK/en. With free delivery this Christmas, there’s no need to wait for the arrival of Santa to treat yourself.