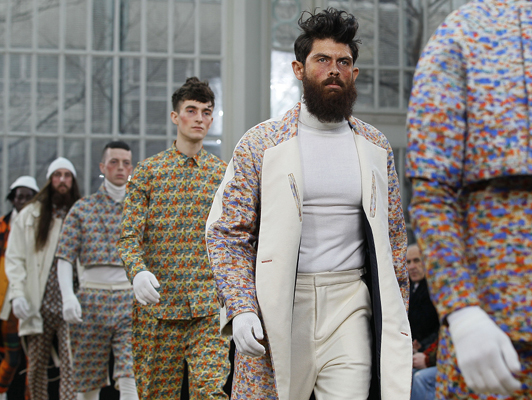 POWER IN NUMBERS. True of the triptych of Shaun Samson, Agi & Sam and Astrid Andersen at the MAN show this LFW and their collections.  From the first to the last model, there is proof that these designers have landed on the fashion earth and are here to stay.

Collectively, these designers epitomise the power of the new, the power of revolution. Together, the three shows narrated the banding of brothers- a positive gang mentality- within an apocalyptic and space age.

Having caused a sensation with his debut collection for MAN, Shaun Samson went on to present his second one for the AW ’12 season; delivering his designs of ‘Men’s Modern Street Wear’ which he makes completely his own through his belief that clothes should be wearable, effortless and special. And special it certainly was.

Exploring groups such as sports teams and urban street tribes, Samson meshed (quite literally) traditional fabrics such as sweatshirt fleeces with appliqued faux-fur details. Closely examined, the detailed fabric experimentation also showed invisible zips and slashed necklines. Oversized silhouettes were a constant, with low-shouldered jerseys perfectly skimming the knees of baggier than baggy shorts. Favourites were the dungarees which were injected with urbane dynamism through Samson’s incredible play on dimension- not only oversized, but low on top and three-quarter length on bottom. Almost intimidating, these pieces have set the urban trend for the Autumn.

From urban to apocalypse now, we travelled with the band of brothers to Agi & Sam where hues of burnt orange, red, grey and all colours of the apocalypse hit our eyes. Repeated weaves of print on print, tartans and tweeds in bright hues, Agi & Sam turned to the idea of the last men on Earth recreating the finest cloths of the finer days of life. More than just fine and fiercely coloured prints however, the materials were all produced in collaboration with the UK company GreenPac and created from recycled plastic bottles. Proving their mastery of both print and materials, the duo manipulated their weaving of polyester fabrics to replicate cotton drills and jersey.

Cropped, low shouldered jackets and jacket-suits were styled with roll-necks and there was the occasional double-breasted suit (in tartan).

Inventive, highly impressive and incredibly green, there was still the humour that the two are known for. At first seeming as beautiful coloured details, chickens and ducks appeared on a dove-grey suit and tie personifying the collection and the age-old question of ‘What came first, the chicken or the egg?’. Vivid and dynamic, and in their own words, not wanting to ‘fashion to be taken too seriously’, Agi & Sam proved that fun can be had in any situation and with their clothes, it can be seriously good and talented fun.

Finishing of the show and we entered into Space Age. More serious than its preceding comrades, Astrid Andersen brought the MAN show to a close on an incredibly high note. Rich in concept as well as a colour palette of orange, grey and neon pinks, the collection was inspired by hip-hop’s biggest group, The Wu Tang Clan. The exploration of the group mentality was furthered by Andersen’s interest in paying homage to the Shaolin warrior monks of China. Legend has it that one Shaolin warrior was equal to 1,500 soldiers in battle, and this legend carried through the clothes with Andersen aspiring to ‘dress men to feel 1,500 the man’.

And was this achieved. A mix of contemporary and luxury sports and urban wear, Andersen wowed the crowds. Cropped puff jackets (a signature piece) were met with high-waisted denim and grey baggy shorts. Fur also featured on hoods and defined a beautiful jersey-coat with a silver collar.  The concept reverberated through the whole collection and was brought to perfection with the painting of each model’s chin in a black warrior logo. The finishing touch was the finale where the models, the warrior men, grouped together and strode down the runway like the band of brothers that they are. There is nothing as mesmerising as conviction in brothership, and Andersen is dressing them all.

The political theorist, Hannah Arendt, once defined the impact of revolution. She argued that there is a difference between ‘revolutionary war’ and ‘warlike revolution’, and it is this difference which is essential to one’s credibility and making a mark in the world. Violence and shock tactics only get us so far, especially in contemporary times where we have became almost immune to them. Revolutionary war is vacuous and futile, breeding nothing new and lasting for a fleeting moment. Yet war-like revolution is different. It admits and accepts the need for something stronger, for violence, yet it begins with the premise of delivering a change or a movement which is here to stay. It relays that a mark will be made on the world. And this is exactly what the three designers showed, both separately and together.

MAN is not only an initiative which supports new designers, but it is also an initiative which allows for the celebration of the freshest talent and allows for them to clearly make their mark on the world. There is an undeniable echo that featured both within the show and the collections- it is a manifesto that celebrates and calls the band of brothers to come together in these times.

The contemporary man is the man that is not afraid of the present and the very immediate moment. And he is experimenting with and challenging all his resources. So let us go forth, comrades, in brights, prints and street and in laughter.