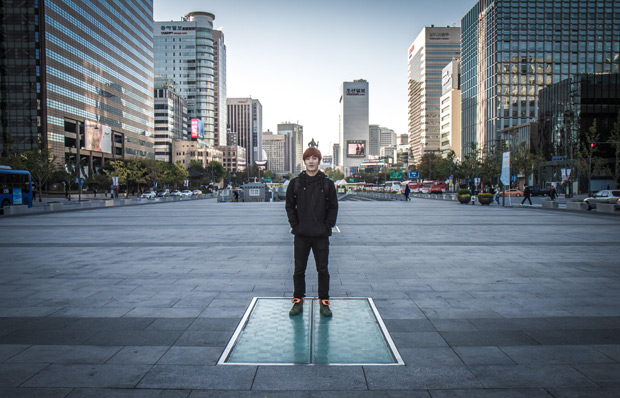 In the latest instalment of Palladium’s Explorer Series, South Korean b-boy Bruce Lee shows us around some of the hidden spaces in the busy, modern metropolis of Seoul. The rugged practicality of Palladium Boots is emphasises as Lee travels from abandoned tower blocks to the Cheonggyecheon River – an oasis of calm in the middle of a powerful industrial city.

Lee talks about how the different elements of his home city inspire his creativity and influence his dancing, and explores the relationship between the old and the new Seoul. Lee’s trade is b-boying (also common referred to as breakdancing) and his film follows him exploring Seoul and finding spaces in which to practice with his Palladium boots.

First, we see him find an abandoned, half finished building that is yet to be consumed by the rapid modernisation sweeping the city. In the empty space, Lee can warm up in tranquillity and reflect on the fast pace of his home city.

He says that “Seoul is constantly transforming and… in the same way my dancing has developed”, and the Palladium boots he wears enables him to continue exploring throughout the day.

After following an abandoned railroad, Lee arrives at the newly restored Cheonggyecheon River and changes into some MA-1 Baggy Zip boots to keep practicing in the river itself. The “old and the new” has been blended to create a beautiful public space once again after it was initially covered with bridges and buildings.

That spirit of combining the old and the new is found in the heritage of Palladium boots, hence why this collaborative venture is so appropriate.

Lee ends the day on Namsan Mountain and observes the entirity of Seoul at once. Reflecting on his home city that serves as his stage, Lee observes that “by going back and studying our history, we are inspired to make new things” and that is very much the attitude of Palladium boots as a brand.