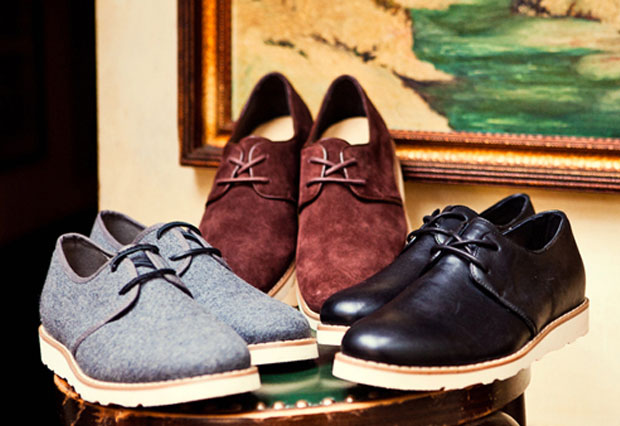 Shoes are the face of any outfit; they are the main attraction. If you get only one thing right about your look – make it your shoes. Considering they spend the majority their time walking over cigarette butts and under tables or desks, they are surprisingly the most fundamental item of menswear. Because of this, we have broken down five of our favourite styles of footwear, and detailed which brands fit the bill.

Style One: The Brogue

It’s hard to think of a more classic shoe than the brogue. Originally from Scotland and designed to withstand days in the elements; this style shoe is perfect regardless of the season. As with any item of Menswear, versatility is paramount – that’s why the classic Brogue tops our list of our five favourite styles of shoes. Going to wedding? Wear a pair of Brogues. A day in the office? Wear a pair of Brogues. Big night out? Wear a pair of Brogues. You get the idea. Up the sartorial stakes by investing in this killer style of footwear.

This style of shoe that was adopted by Norwegian fisherman in the early 1900’s based on their sheer comfort and room for movement. We’re still not too sure why comfortable shoes are essential for fisherman; don’t they just sit down all day? Who knows? But what we do know is that the loafer is as relevant today as it was back then. Although slightly less formal than the brogue, the loafer remains considerably versatile and is the perfect way to liven up a suit. This slip on style of shoe allows you to be free of socks if you wish – making for a unique and edgy look. Conversely however, the loafer can be worn with socks which allow you to show an accessory that’s commonly unseen.

Originating from the Victorian era with the purpose of horse riding in mind, Chelsea Boots are high to the ankle, tight fitting and commonly seen in black leather. Constructed with elastic siding for ease of access – a well made pair of Chelsea boots could be the most pleasantly fitted shoes you’ll ever own. It was the late 1800’s when the Chelsea boot really became a fashionable shoe. And still today this style of footwear is a wardrobe staple for both men and women. Whilst a classic pair of black leather Chelsea boots are undoubtedly smart, a lighter coloured pair in a suede finish gives the same sophisticated appearance but stands out that little bit more.

Sneakers are essential to every modern Gentleman’s wardrobe and more so in recent years. Although we still don’t advise them In formal occasions; they are (of course) perfect for exercise and those lazy Sundays. Near enough every top menswear designer has a range of sneakers making it difficult to choose the right style for you. Here at Men’s Fashion Magazine we favour the classic basket ball or track style.

By now, we’d like think you have a more adept understanding of the variations of men’s footwear. But, choosing your preferred style of shoe is only part one of two. Now, you must choose which Brand/Designer to buy from. In our experience, it’s only shoes where spending that little (sometimes a lot) extra makes a sizeable difference. It’s said that a quality, hand crafted – and usually expensive – pair of shoes is an investment, and when looked after, they can last near enough a lifetime. It’s also suggested that in the long run, buying more pairs of cheap shoes could become a more costly alternative. Because of this, we have listed our top five designers whose profession is producing impeccable footwear.

Northamptonshire is a well known shoe making destination. And, this is largely down to Mr William Grenson founding his shoe making company ‘Grenson’ back in 1866 in this very town. From that moment onward, Grenson have been the hall mark of well-made British shoes.

Producing shoes since 1849, it’s safe to say John Lobb have established themselves as a leading men’s shoe designer. Each pair of John Lobb shoes are precisely put together by hand and the general process can take up to several weeks. Absolute attention to detail is something no John Lobb shoe goes without.

Another traditional English shoe makers that specialise In flawless craftsmanship and carefulness. Founded by three brothers, Thomas, John and William Loake; the company is still run by members of that same family. An honourable heritage and quintessentially British designer.

Unfortunately, one of the most under rated shoe designers on the market. Unknown to many Clarks were formed in 1825 and have been designing remarkable shoes ever since. Clarks are particular well known for inventing the original Desert Boot. Still today they are the leading seller of this style of shoe.

Everybody knows – and loves – Converse. Perhaps the ultimate Sneaker designer for both men and women. The company began in 1909 and made famous by Mr Chuck Taylor. Converse produce: high quality, affordable, timeless yet always on trend sneakers that are simply unexcelled.

To conclude, purchasing a new pair of shoes can be a daunting task at times. However, the article above is aimed to clear things up as best as possible. We appreciate that everybody doesn’t have bottomless pockets and spending large amounts of money on a pair of shoes is a big ask. But on the other hand – as previously mentioned – buying from skilful footwear designers will prove to be a lifetime asset.