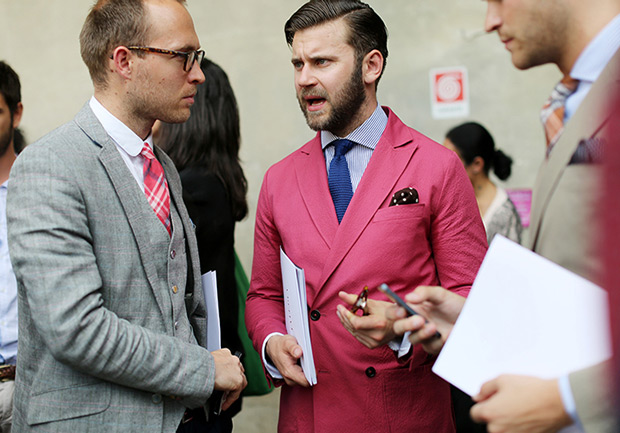 Holland Esquire was created in 2001 by prominent tailor Nick Holland, and since its formation, it has established itself as one of the finest tailoring companies in the United Kingdom. The company prides itself on its exclusivity: its products are made in very limited numbers, thus ensuring originality and distinct design. This is reiterated by the fact that many of the delicate fabrics used are specifically designed by Holland Esquire.

The new collection contrasts subtle blues and greys with bold pinks and patterned fabrics. Details such as the distinct buttons, delicate stitching and slim fit further establish the fact that Holland Esquire have reinvented the classic suit.

The Sartorial 7 are a group of fashion obsessed men who have formed a style collective. According to their website, their aim is ‘to inspire the everyday man to live a designed life’. The group are certainly able to do justice to the clean summer tones and styles of the SS14 collection. The London-based group of style icons have modelled the looks in a way in which best expresses each individual’s personality and unique style.

The Holland Esquire SS14 collection is available to purchase from www.hollandesquire.com and selected stockists nationwide. The distinct clothing range is sure to make its customer stand out from the crowd. It is no wonder that the brand has received widespread praise, including being named as one of Harrods “Top Ten Best British Tailors”.