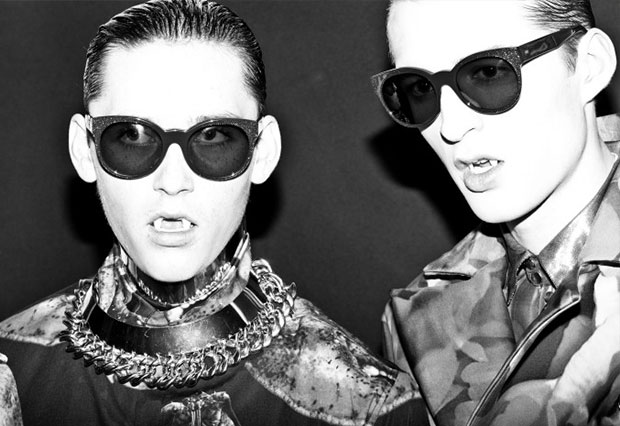 One way to go about making oneself known as a designer is to create in-your-face pieces that are near impossible to ignore. In a contemporary context, where so many are seemingly proud to be loud with their dress, Katie Eary appears to have struck gold. Her playful designs have thrown her right into the forefront of the industry’s attention, which continues to welcome her with open arms as this young London talent blossoms into full bloom.

Eary, who has openly alluded to a somewhat lacking diligence during her school years, studied menswear fashion at the Royal College of Art. Still fresh-faced and brand new to the scene, she had her foot placed firmly in the door when her graduate collection was shot on Kate Moss by Mario Testino. Shortly after, the then young talent received an email from Kanye West, who declared his fervent interest in the Katie Eary aesthetic and later expressed a desire to create what was to become an impeccably fitting collaboration. It was clear from the beginning then that this was no silly London girl with a few whacky ideas that were to fade into nothingness as mere novelties. Within a few short seasons since her graduation, Eary had learnt to straddle the Atlantic, her fingers in multiple pies – having set up her own brand and working closely with Yeezy – and her international fan-base growing with formidable speed.

The designer cites the Katie Eary man as one who could be “treading the monumentally versatile line between Vogue and Vice”. And that speaks volumes of both customer and creator. Eary’s collections strike a balance between dark opulence and whimsical, light-hearted fun. Her design references and inspiration might span nature and the animal kingdom, and extend to the Baroque period or even the twisted darkness of a fairy tale. Each notion is masterfully articulated into well-cut pieces that boast strong silhouettes and unfussy shapes that serve as a suitable palette for the audaciously eccentric graphics and prints the brand has become known for.

The AW13 collection features some of Eary’s finest signature prints to date amid oversized looks that honed a particularly tough aesthetic: ghetto-superstar-hashtag-swag-hashtag-thug-life, if you will. The brand’s focus on the 21st century phenomenon of “streetwear” is evidently at the heart of each garment and its styling, which has led Katie to commercial success as well as critical acclaim. Not to mention the soft spot much of the hip-hop scene seems to have reserved for her.

Earlier this year, Mr Porter – notably an MFM favourite – launched Katie Eary as one of its new designers for the season, which comes after countless collaborations with the likes of Topman and Selfridges and a first foray into the design of particularly well-received printed skateboards. There is apparently no stopping this force of nature, which has been described as having an energy similar to that of her designs. What’s perhaps most interesting is how Katie Eary seems to be exactly what a London designer is about. Exactly what the capital has to be proud of: a successful designer who is managing – and long may it continue – to find the middle ground between artistry and business; who boasts both creative ingenuity and Savile Row standard tailoring ability; a designer whose idea of luxury, it would seem, is affording her customer a fun and inherently cool, yet somehow still smart style of dress. May she continue to blossom, just like the delicious flowers that decorate her exquisite AW13 pieces.