Stuart Trevor went under the pseudonym ‘The Saint’ based on his initials ‘ST’ but here at MFM we believe that pseudonym comes for another reason. Trevor was the founder of 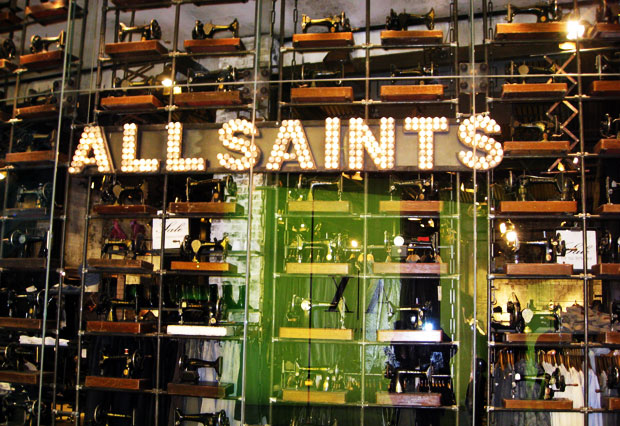 Stuart Trevor went under the pseudonym ‘The Saint’ based on his initials ‘ST’ but here at MFM we believe that pseudonym comes for another reason. Trevor was the founder of All Saints back in 1994 along with his partner Kait Bolongaro – the two have not only given us a visual stimulus in the way the stores are laid out but a wonderful edgy sense of fashion, for that he should be giving the name The Saint. Sticking to whites, blacks and greys, All Saints – to some – might seem quite plain. In fact, what All Saints offers us is a sophisticated style that may say one thing but holds many other messages.

All Saints was once a simple store that sat on Foubert Place off Carnaby Street in London and its growth – like most companies – it had many ups and downs. All Saint’s first major surge was in mid-2004 when it had expanded to ten stores in the UK however by 2005 Kevin Stanford, a fashion financier, had bought out all of All Saint’s partners besides Trevor who, by December of that year, was bought out too. With the shift of percentages owned, it wasn’t until 2009-20010 that the company expanded even further and launched into America, opening first in New York City.

When the store came to New York, Mary Billard of The New York Times called the company’s style ‘British chic rock ‘n’ rool’, pointing towards the Gothic nature of the store’s layout and the dedication to the colours in their clothes. All Saint’s arrival to New York was not only noticed in America but also back in the UK where Julia Finch of The Guardian wrote about the store, saying: ‘Its trademark motif is a skull and its speciality is the distressed look; clothes made to look well worn-in and scuffed Victorian-style boots without laces.’

With All Saint’s dark, rather Gothic style there is the sophistication that I spoke of. From coats for the winter and belts to accessorise your outfit, All Saints offers a huge variety within the look they respect and enjoy expanding. Take a look:

Winter is most definitely here and those of you that don’t have a coat, run out and get one. On your way, stop at All Saints. I’m cursing myself for not having bought the first of these coats – a simple black number but one that juggles the look of smart and casual perfectly. The length of it combines those factors. With the coats you can go from jackets to sleeveless coats that test the balance between warmth and the look. All Saints is all about testing new ground and their coats show this.

Whether it is for going out to an event or wearing them around the house, the shirts that All Saints provides stick to their original look but allow that movement of smart and casual. With the orishi shirt rolling up the sleeves will give off that casual look when the shirt itself is full of sophistication. With plainer colours wearing these shirts allows you to combine the look with a variety of other options.

I’m a man of the cardigan and stuffed away in my wardrobe are cardigans from All Saints – three buttons to six, slim fit to baggy, All Saints has a wonderful collection of cardigans in their knitwear range. Knitwear – as I’ve said before in previous articles – is not just for the winter but, when used in winter, it helps with those cold days. It helps when the tough decision of looking stylish and warm is first in your mind but, thanks to All Saints it isn’t a decision – they’re already combined.

With any outfit there has to be accessories and All Saints’ accessories with their specific stamp of colours has made it impossible not to match with other outfits. Adding the brown belt to compliment a pair of boots or a beanie to shield your head from the winter, accessories complete outfits, they hold them together and make you look incredibly stylish.

What we love here at MFM is a commitment to variety. With All Saints there is a specific look the company is trying to give off to its customers but there is such a variety, such an intrigue in fashion within its products, that it’s impossible not to find something you would like. With the back-drop of its stores, the Singer Sewing machines whirling away, All Saints offers the perfect blend of edge and sophistication. We want to hear from you so let us know your thoughts and opinions of All Saints or any experiences you may have of the company.