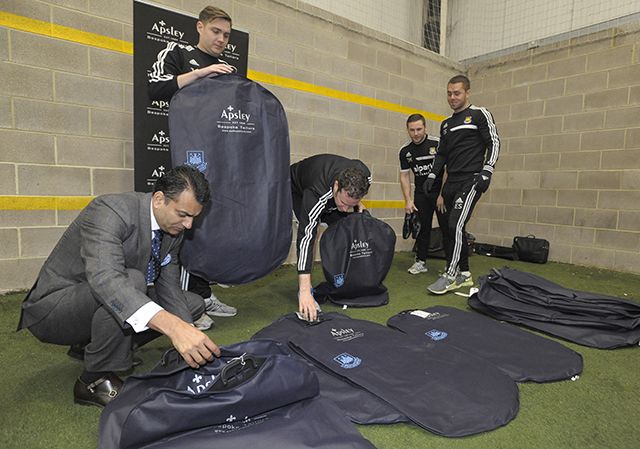 Apsley tailors, located in Pall Mall, have teamed up once again with West Ham United as their official tailors. The tailors, who were established in 1889, will dress the whole team alongside management.

As the official tailor for West Ham United last year as well, it really does show loyalty towards the tailor from the club and players. This season’s suit features a dark blue superfine 150s wool cloth, with a one button single-breasted blazer and a peak narrow lapel. The team have opted for a more tapered fit, with a slightly shorter jacket and narrow/tapered fitting trousers offering a modern and stylish silhouette that will suit the athletic build of the players. The lounge suits are lined in red and the team’s new ties comprise a plain dark blue ground with the West Ham United logo.

It’s always good to see what the players think about the suits provided, so we headed down to the photo-shoot to catch up with some of the players. It also gave us an opportunity to see what they’re personal style consisted of.

Joe Cole, Midfielder says: “it’s a very nicely fitted suit, I like the new red lining as well.  Apsley got the team colours of blue and claret in there, but quite subtly.  For me, I like desert boots and jeans, and for an evening out maybe a shirt and a nice fitted jacket. I would wear a jumper if I am going training and I do like parkers as well. I like the mod look and prefer street wear more than smart wear but for TV I do tend to wear suits. You can team this Apsley suit jacket up with jeans, for a more casual look as it can go with anything. Being bespoke helps, but being an athlete is difficult for suits, as your body changes on and off-season – the fit will all depend on what time of the year you get fitted!”

Captain Kevin Nolan says: “the lads all look really smart – we worked hard with Apsley to get this cut and it looks fantastic – so I am absolutely delighted with what we got and the result.  Definitely a satisfied customer! It’s also nice for the team to turn up and feel good in what they are wearing – the lads will feel good when they look at themselves in the mirror and it will gear them up a few notches. I don’t normally wear suits off the pitch, but I do enjoy them for the big occasions and obviously weddings. Getting fitted for a bespoke suit – it’s nice doing that at the beginning of each season at Apsley and to see the finished product.”

As for Kevin Nolans personal style…

“I like to be smart off the pitch, but on a day-to-day basis I am dress casual in jeans, maybe a tracksuit, but if I go out it will be a suit jacket and shirt or maybe a jumper and tie.  My favourite item? the lads will say my tracksuit? [he laughs] No, to be honest the older I get, the more I like to be smarter.  Now I’ve got a whole rack of jackets, shirts and quite a few ties – definitely smarter in my old age!  My wife does buy me a few things at Xmas, and she does really well, but I usually pick everything myself.”

What about the least stylish player at West Ham we asked…

“The least stylish player at West Ham? [he laughs again] Look at his shoes! It’s Joe Cole obviously, and those are his best shoes – no, actually he has got better since we started on at him – and Jack Collison’s gear is horrific as well! Andy Carroll, he walks in to a shop, sees a mannequin he likes and says “I’ll take everything in my size.” When he looks good you know that’s what he’s done in a shop:  “I’ll take the mannequin please!” He’s got better with age.”

Midfielder Matt Jarvis says: “my suits fits very well – I’ve worn my Apsley suits a few times, not always for WHU events.  I like to dress up in a suit and look smart – having it bespoke is a real advantage as I am a bit of a weird shape – I always have to have my trousers taken up as I am a little bit shorter than the others and I’ve got bigger thighs and arse!”

We’re fans of what Apsley do, and this really is a great suit. It certainly made the whole team look a lot more stylish, and the subtle colour detailing reflect nicely with West Ham as a club.

Apsley Managing Director Arshad Mahmood says: “we have enjoyed working with West Ham United for another season as their official tailors. Our position as one of the UK’s most prestigious tailors to the country’s brightest sporting stars can only happen if we get on with the players, and listen to their requirements. This year we have opted for a contemporary shape which the players are all very pleased with.”