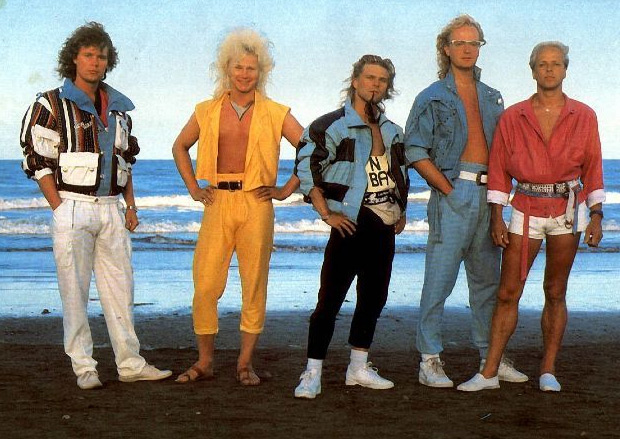 As we near the end of the ‘a decade in fashion series’ we now look towards a decade which may be considered one of the most fun eras in fashion or some may even consider the worst. The 80’s was known as the decade of excess, and everything had to be done on a big scale including fashion. Men were no exception to this rule as the majority of what they wore during this time was influenced by what they were into socially and musically.

The difference in style’s compared to earlier decades was quite significant, no more 70’s disco era but instead looks appeared that were heavily influenced by androgynous pop stars, hip hop culture, hair metal bands and action movie stars and TV celebrities. Many of these styles knew no limits and this could be seen in how a man would dress for work, he would wear clothes that could also be deemed appropriate for  leisure activities such as for an evening out at a nightclub. There really were no limits to where you could take your style, no matter who you were or where you came from there was always something to suit your style and personality.

Although the men of the 80’s may not have worn exactly the same outfits seen on screen, there was definitely a lot of influence in this area. The look that often ruled the 80’s was often cool and casual. Miami Vice was a popular TV series at the time and men liked to follow the style of Don Johnson and Philip Michael Thomas. This kind of style consisted of casual t-shirts under designer jackets, suits in pastel and bright colours. Loafers and boat shoes were popular at the time and were often worn without socks; also it was the style to wear your sleeves pushed up and your jackets open. It was also common to wear a shirt without a tie to the office and Hawaiian shirts made popular by TV show Magnum P.I. could be seen in and out of the office. It was also movies that influenced styles of the 80’s, leather and sports themed jackets worn by Eddie Murphy in Beverley Hills Cop became widely popular. The leather jackets worn by Arnold Schwarzenegger in The Terminator became very popular as well.

As with any decade, we always find influence from film, TV, celebrity and music stars. This seems to al start in a huge way during the 80’s. Celebrity hysteria could be witnessed at some of the biggest music stars concerts, and this lead people to begin imitating the style of some of their most favoured icons.

Michael Jackson: There was no icon bigger than Michael Jackson. His style defined much of the clothing in the 80s. From leather studded jackets to slouchy and oversized tops, men wore clothes that resembled Michael’s unique style. Who could forget the sparkly glove on one hand look? Not only were studded leather jackets popular but leather bomber jackets were as well.

Heavy metal clothing: Totally opposite from the Michael Jackson look was the look of the hair bands. Men often mimicked the look of bands such as Poison or Metallica. They wore t-shirts. leather/spandex pants and torn jeans often with a bandana around their massively teased hair and studded boots on their feet.

Androgynous styles: For men who were equally as influenced by male fashion icons of the 80s as female, there was the hugely popular androgynous look that was seen on pop stars like Boy George, Prince and Annie Lennox. This fashion style featured men wearing women’s blouses, high-heeled boots, large hoop earrings and faces full of make-up.

Men of all ages and walks of life adored one of this season’s most popular styles the ‘preppy’ look. This conservative style of dress originated in the 1950s and was known as Ivy League Dress, made a resurgence beginning in the late 70s and remained prevalent during the 80s. It consisted of clothing items such as:

Men wore styles that expressed their own individuality and creativity in the 1980s. Whether this meant a style all of their own or one modelled after someone famous, the styles of the 80s varied from one group to another. The 80s saw fashions unlike any other decade, and some of the influences can be seen in clothing worn by men today. How do you feel about the 80s styles? What parts of this decade can still be seen in your wardrobes? Let us know in the comments below.