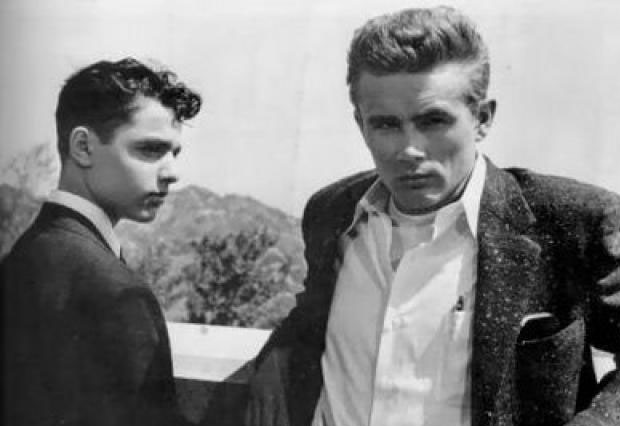 As we continue to jump from decade to decade each week, we begin to see an evolution in how men have dressed. This time we head right into the 1950’s where style was a lot more relaxed and the idea of celebrity began to influence how people dressed. The 1950’s saw the influence of the teenage generation and how they became the most prominent force behind a new wave in expressing yourself through fashion. Up until that time, clothing trends were largely set by the fashion houses that catered to an adult market and the dress style for the youth simply followed the example of the adults.  With the growing popularity if cinema, television and rock ‘n’ roll, the youth market began clambering to copy the style of their favourite stars; this meant that teenage fashion quickly developed into an industry all of its own. During the 50’s teenagers developed a lot of buying power. Newly affluent parents gave generously when it came to pocket money which quickly got spent on obtaining the latest trends and most covetable fashion pieces.

While the trusty suit and business looks were still popular of this time, we look more towards the edgier and cooler side of the 50’s. We have already looked at formal looks in previous ‘a decade in fashion’ articles, so let’s change it up a bit. Conservatism, restraint and formality were all left behind in the 1940’s along with this idea of a bad economy. This meant that the 1950’s allowed for a transition into a looser more informal way of dress. Throughout this decade it became far more acceptable for men to dress for show, and therefore style became more adventurous and personal to the wearer.

With the sudden influx of cinema and television, teenagers of the 50’s were introduced to many new fashion ideas through the inspiration of their favourite movie stars. Marlon Brando starred as a misunderstood motorbike punk in ‘the wild one’ in 1953, and we all know James Dean for what might be his most well know role in ‘Rebel without a cause’ in 1955. It was this kind of icon that inspired a generation of young men to mimic this style and attitude. Jeans, boots and a white tee became the symbol of teenage rebellion for young men everywhere. Not all teenage boys emulated this kind of look, towards the end of the 50’s a British influenced Teddy boy style became a popular trend amongst young men. Drain pipe trousers, jackets, slim ties and pointed shoes called ‘winkle pickers’ became something of a style staple. At this time Elvis was one of the most famous stars of the 50’s, and his style struck a chord with the teen market. He inspired young men to wear brighter colours and sharp flashy suits became a big trend, combined with loose unbuttoned shirts with an upturned collar; just like the king himself.

These styles and icons were part of what began the obsession with celebrity culture and its influence on the fashion world. Clearly back then was nothing in comparison as to how celebrity obsessed the world is today, but what this shows is how fashion has been the driving force behind a lot of cultural influences. It’s icons like Elvis, James Dean and Marlon Brando that inspired men to dress a little cooler, edgier and dare we say it a little sexier. So now young men really began to take control of what their personal style said about them through the inspiration of those that they looked up to.

Look One: The Rebel

This is a look inspired by someone who does not need an introduction. Mr Dean was and still remains an icon in his own right. To achieve the look all you need to select are a few basic pieces topped off with a decent jacket and in your own brand of easy cool attitude. This style is simple and easy to put together, plain t-shirt, jeans and leather boots are the basis for the rebel look. For a bit of a Marlon Brandon spin, swap your bomber/Harrington jacket for a leather biker one to add a touch of tough to your style.

Elvis’ style in the 50’s has become almost as iconic as his Vegas years, but luckily for us the bright blazer and white shirt look is what is popular right now. The Vegas outfit is best left for costume parties. Bright colours are in this season so you won’t be short on colour choice when selecting your jacket, but make sure it’s a bold one. Smart white shirt, black pants and some coloured shoes are the perfect way to finish off this look. We do however, recommend that you avoid sticking your collar up in the manner of the king. We are not 12 and we are not at a school disco.

Rebel With A Cause

The great thing about these styles is that they are practically effortless yet still manage to have plenty of that cool style that the 50’s was known for. Whether you feel like a king or even a rebel, these styles have something for everyone. So which one do you think you are? Let us know in the comments below.