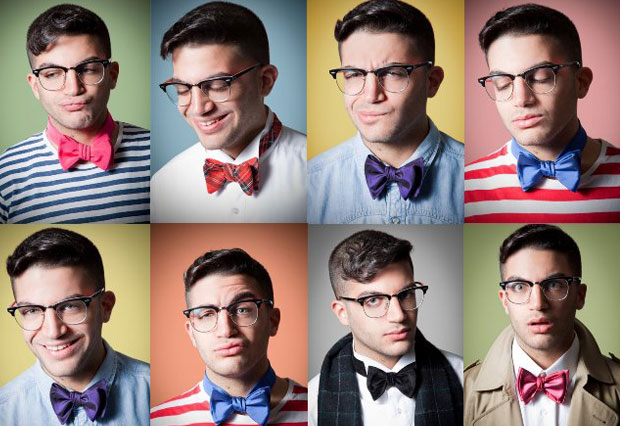 As far as iconic menswear pieces nothing stands out more today than the bowtie. An accessory associated with sophistication and refinement and in today’s world of fashion this piece has become synonymous with a man who likes to stand out. In days gone by the bow tie was merely an accessory of formality, a requirement when one would attend a sophisticated soiree, in the company of the rich and wealthy. Now in the world of modernity and innovation the bow tie is now a piece of fun, wearable clothing that makes a statement about who the wearer is. Bow ties are a fun and inventive way to add some extra style to an outfit. A quote from Warren St John of the New York Times sums the bow tie up perfectly:

“To its devotees the bow tie suggests iconoclasm of an Old World sort, a fusty adherence to a contrarian point of view. The bow tie hints at intellectualism, real or feigned, and sometimes suggests technical acumen, perhaps because it is so hard to tie. Bow ties are worn by magicians, country doctors, lawyers and professors and by people hoping to look like the above. But perhaps most of all, wearing a bow tie is a way of broadcasting an aggressive lack of concern for what other people think.”

It has been said that bow ties originated amongst the Croatian Mercenaries during the Prussian wars of the 17th Century, they would apparently use a scarf around the neck to hold together the opening of their shirts. Who knew that the bow tie could ready someone for war, I use coffee and a bow tie to ready myself for work and sometimes that even seems like a battle. The Croatian Mercenary version of this iconic accessory is what may have laid the plans for the development of what we call the cravat. This was adopted by the French upper classes of the 18th and 19th centuries, at this time it was the French aristocrats that were seen as the leaders in fashion and style.

The most traditional bow ties are usually of a fixed length and are made for a specific size neck; this is where sizes of bow ties have similarities of collar sizes on shirts usually ranging from approximately 14 and 20 inches. It has now become a popular trend to wear pre-tied adjustable bow ties, not only does this moderate production costs but it also gives the wearer more options and is less time consuming to put on than a traditional bow tie which the wearer would have to tie himself.

Past connotations instinctively gravitates the mind towards this idea of old school professors, and ancient university lecturers as the stereotypical wearer of a bow tie. Along with this is the idea of geeks and nerds which many years ago was a negative association. However trends have evolved and the idea of being a ‘geek’ is considered stylish and on trend. Simultaneously thick rimmed geek glasses have become popular amongst the younger fashionista who regularly buy imitation geek glasses to look cool even though they have no visual impairment, just a simple desire to look ‘cool’.

The popularity of the iconic bow tie has lead to an influx of fashion retailers supplying and selling an abundance of these versatile little accessories. It’s hard to believe that something as small and simple as the bow tie could have as much impact on men’s fashion as it has. You can pretty much pick up one of these dapper accessories from any fashion store or website. Why not take a look at some of our favourites that we have spotter on our favourite websites.

If you think back to wear this simple little accessory started, to where it is now and how it is considered as part of a dapper gent’s wardrobe; really makes you think how iconic the humble bow tie has become. Many celebrities can be seen sporting them and many designers include them as part of their collections and runway shows. As always we look to fashion to inspire us in new ways, and to show us different paths of self expression through the simple choice of garments. So we look to the bow tie with admiration, and the next time you fasten one around your neck be sure to take heed the power in the simplicity of this iconic piece of menswear.