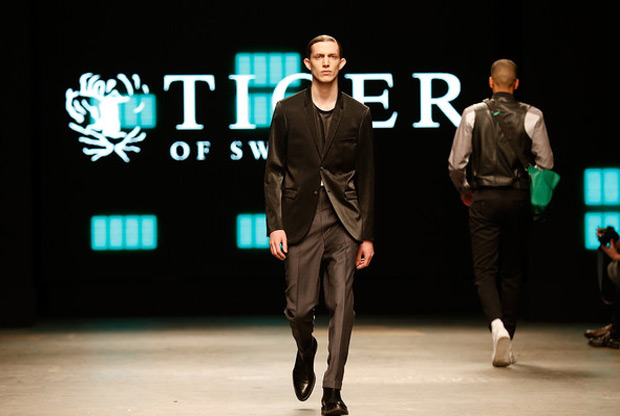 Tiger of Sweden offered us a modern, fresh take on the upcoming 70’s trend that is pervading both Spring/Summer and also Autumn/Winter 2015. While other brands are showing flares and suede, Tiger of Sweden has looked to the synth-inspired, post punk set as inspiration for their latest collection. 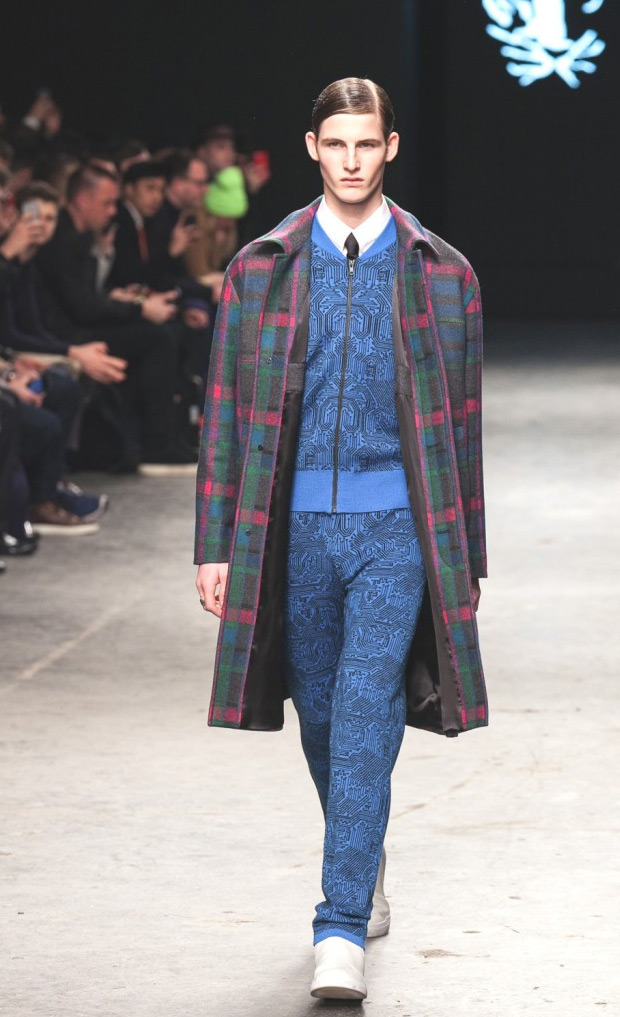 After the safety-pinned leather and ripped jeans of the punk movement, there was a noticeable move towards sci-fi as the influence for a whole generation of young adults in the mid-70’s, and synth music collection played a vital role in this. The metallic, ultra-modern style saw sharp suits with slim-fit shirts and skinny ties replace the punk era of rock bands, guitars and anti-establishment messages. 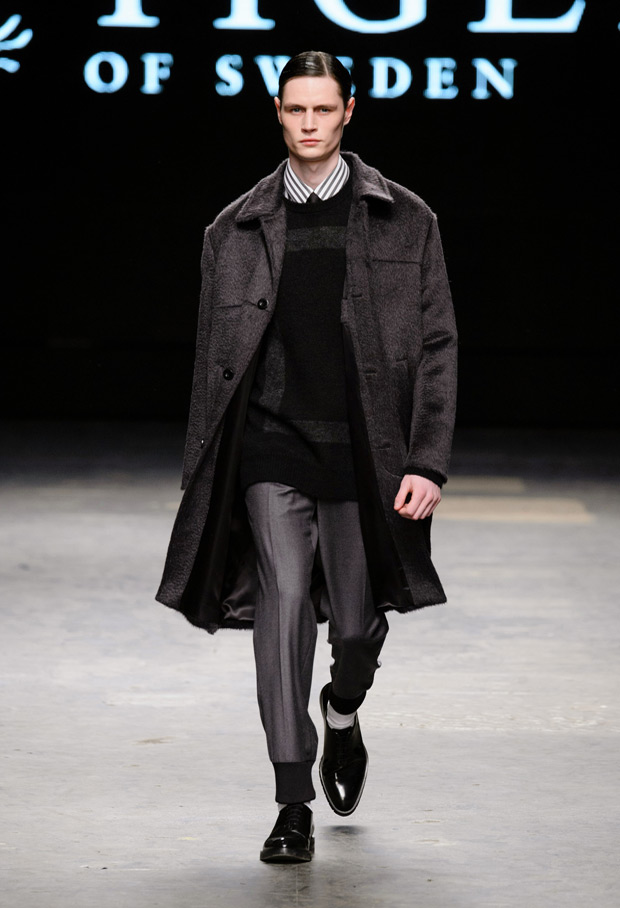 This futuristic aesthetic is what we saw referenced at Tiger of Sweden, which focused on the suit as the centrepiece of the collection. The silhouette was elongated through the use of high-waisted trousers, but kept modern with a tapered leg.

Shades ranged from military green (set to be a popular colour for the Autumn/Winter season) through to beige and midnight blue and were fabricated from yarn-dyed jacquard and mohair in both lighter and denser weights for winter. 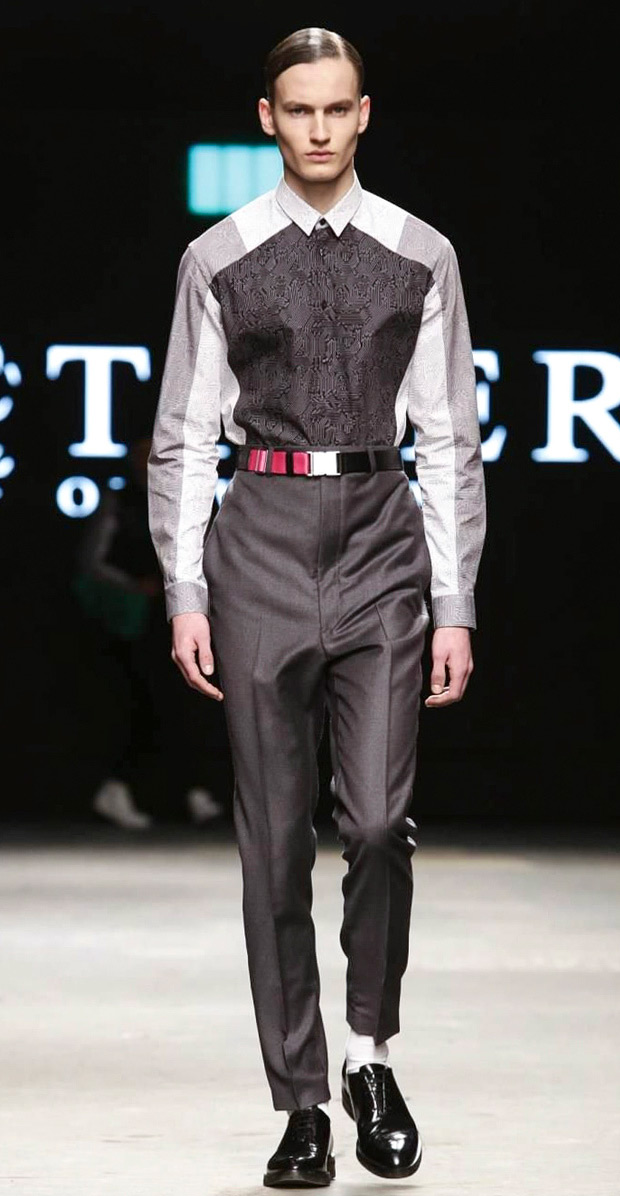 The references to popular synth music also appeared in the neon shades of electric blue, lime and fuchsia punctuated the otherwise formal collection – they were said to be reflective of the colours produced by graphic equalisers. Jersey knits, ties, socks, bags and belts were all presented in these hues, while tracksuits and hoodies in these bright shades gave a softer, more relaxed vibe to the collection.

They were balanced, however, by being contrasted with the rich browns that also appeared on shoes, on suits and on one particularly standout shearling coat (it couldn’t have been a 70’s inspired collection without some obligatory shearling).

As an additional detail, also present in the show were two shirts that were produced in collaboration with Derry-based brand Smyth & Gibson. One shirt featured a cutaway detail and the second featured a tie bar collar. 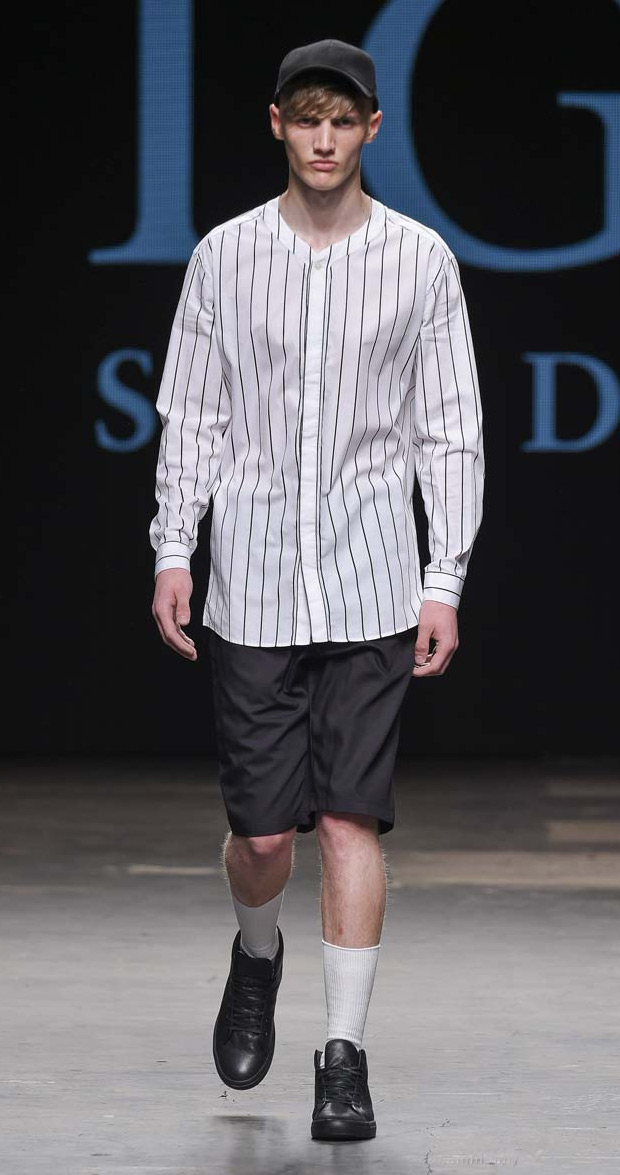 Geometric patterns that took their inspiration from circuit boards were some of the finer details that finished off some of the suit shirts as well as the elongated intarsia and jacquard knits, which worked to further contrast the muted blacks, greys, navys, mustards and forest greens that made up the majority of the palette of the collection. 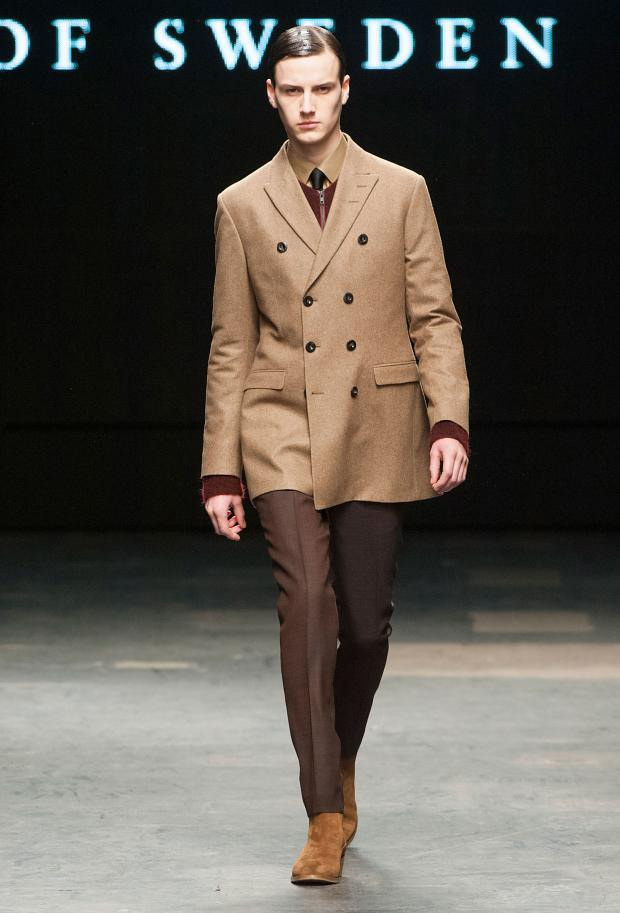 Tiger of Sweden has offered up a very different take on the 70’s trend. It was refreshing to see references to the decade that didn’t include tartan, Mohawks and electric guitars, or else flares, brown suede and platform boots.

A slick, synth mob suited up in metallic shades and neon pops is certainly a more modern way to reference the decade that everyone is talking about this year.