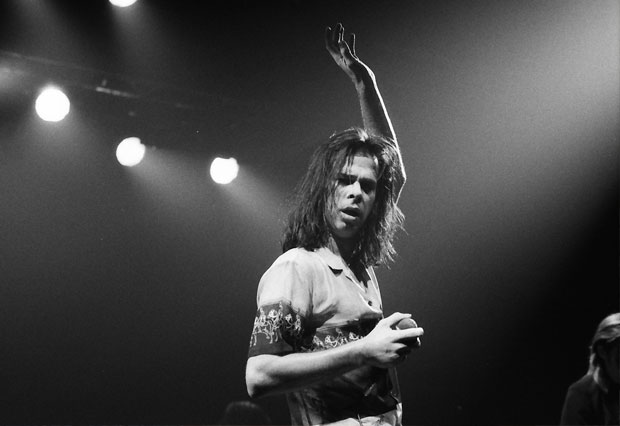 Lead singers and those who masquerade under its limelight have never been afraid to break the rules of convention, if anything, they make it their mission to rip up the rulebook, shun the naysayers and tread a path all their own making.

Nick Cave, lead singer and songwriter of The Bad Seeds is perhaps the perfect example of this act of rebellion. Known for his aloof, some might say taciturn manner (rarely does a smile emerge upon those gloomy lips in a photograph), Cave has this air about him that seems to defy the regulations the rest of civilization functions within.

Cave is his own man, and what a man he is. Musician, songwriter, author and film score composer, his curriculum vitae is the envy of men the world over.

Cave first came to prominence in the early late 70’s and early 80’s through the angst-ridden lyrics of The Birthday Party, a post-punk band of whom Cave was the lead singer. Renowned for their live acts, where Cave would throw himself around stage with a crazed gusto, the band were tagged with the Goth moniker, much to the chagrin of Cave and fellow band members.

When the band split up in 1983, Cave went on the join the Bad Seeds and has been the ever-present lead singer, receiving both critical and commercial success as he has strutted his way across the globe.

While he may be revered for his artistic endeavours, like all great artists, his sartorial choices single him out as a man who thinks not on the whims of others but solely for himself. Cave’s dress sense is one all of his own; the tall, lithe frame, long dark hair and moustache which has become synonymous with his look all combine to forge an identity which is immediately recognisable as Cave’s and Cave’s only.

Just as likely to appear clad head-to-toe in black as he is in cowboy boots, flares and a floral shirt, the beauty of Cave and his dress sense is that much like the man himself, it’s impossible to pigeon hole.

His choice of clothes may have varied as he has grown older, there is no likelihood of seeing Cave in cut off t-shirts and ripped jeans as would have been the case during his days in The Birthday Party, but even today this creative polymath cuts a fine figure of sartorial elegance.

Cave may be well in to his 50’s these days but the look he wore in the late 70’s and 80’s is as relevant to modern day front men as it ever was. Cut off or high-rolled white t-shirts, skin-tight black jeans and necklaces flailing about all combine to create this rock’n’roll look.

No man quite does the suit like Nick Cave. With that tall, lean frame, that shock of black hair and the way he holds himself, Cave owns the suit rather than the suit owning him. Keep it simple with a classic, slim cut black suit and white shirt but give it that Cave edge with a pair of Chelsea boots and a skinny black tie worn loose around the collar.

People often associate Cave with a dour, somewhat morose demeanor, a man clad in black who can barely muster a smile. However, any man who struts about on stage as Cave does must have a flamboyant side to their persona and that is evident in many of his sartorial choices. Floral shirts, bright coloured blazers and suits all just add to the Cave clothing repertoire.

Nick Cave may not be a household name in the same manner as other musicians such as Mick Jagger and Kanye West but there is no escaping the fact this man knows a thing or two when it comes to looking dapper.

Be it music or fashion, Cave has never been one to follow the lead of others, instead creating his own unique path which immediately singles him out as an icon of style.

His is a style which cannot be nailed down, it moves not with the trends or styles of the time but, like all good front men, in time with his own tune.