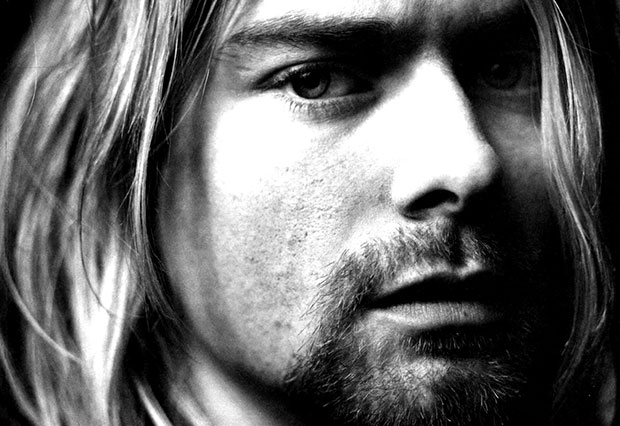 It’s seems somewhat ironic labelling Kurt Cobain with the style icon moniker. After all, this was a man who made a career out of shunning the world, singing about the torments of life and sticking two fingers up to the corporate world as he battled the ills of his troubled mind through a passion for music. But look around you today and the grunge look – so synonymous with Cobain the word could have been invented for him – is on high-streets and catwalks the world over: skinny or slim fitting jeans with holes in the knees, over-sized check shirts worn open with a ripped dirty white tee underneath, Dr. Martens boots, vans slip-ons or converse hi-tops, whichever way you turn at present, the fashion circle has spun from the early 90’s and landed at the door of grunge and it’s leader – whether he liked it or not – once again.

You only need to take a quick peek at the latest Saint Laurent menswear collection for A/W’13 to realise the impact Cobain is having on the fashion scene this season. Both in their advertising campaign and catwalk show there is a distinct nod towards the aloof, long-haired singer with moody models awash in what appear ill-fitting jumpers and jeans your grandma would be ashamed to see you in.  Sadly for us, Cobain is no longer around to air his poetic views on such topics but one thing is abundantly clear, this emergence of the grunge look merely cements his place amongst the style gods and adds to his mystical aura.

Cobain never set out to be a superstar. In fact if ever there was a man who didn’t need the limelight firmly thrust upon his angular cheeks and swathes of long blonde hair, it was this reticent global superstar. Yet alas, almost two decades since his sad and premature passing, teenagers the world over are still listening to the lyrics he penned while in Nirvana, a band revered across the globe for the phenomenal success of Nevermind, an album which threw the band headfirst into an audience Cobain either wasn’t ready for or simply didn’t want a part of.

But the band, their sound and the ways in which they dressed – Cobain in particular – were also part of a bigger scene, Grunge. The term hails from the sound produced by alternative rock bands including Alice in Chains, Pearl Jam and of course Nirvana. There was a sense of angst-ridden melancholia to the lyrics and the morose gaze that emanated from Cobain and his peer’s faces reflected itself in their low-key, who cares outlook towards their sartorial choices.

The look, like all sub-genres that find themselves abruptly immersed in the main stream, became synonymous with teenagers fed up of being told what to do by adults and the clothing they wore – and wear again today – was the ultimate emblem of rebellion.

Look 1: It would be easier to compile three different looks for Mr Cobain but the truth, and beauty, of his appearance was the fact it looked so effortless whatever he wearing. Scruffy converse, those oversized shirts, the ripped or patched up jeans, it was a look that said “I don’t care, no matter how hard I’ve tried.

Look 2: The famous Cobain red and black knit jumper has been resurrected by Hedi Slimane at Saint Laurent and introduces the importance of the grunge style to a whole new generation of men. With a pair of light, slim fit jeans and a good pair of sturdy boots, this look works just as well today as it did on Cobain twenty years ago.

Look 3: Stripes and patterns do not usually make a great combination but when the look you are trying to achieve is one of rebellion, anything goes. There is an effortlessness to this look, one which smacks of a lethargic troubadour not caring what the world thinks of him, which is precisely what Cobain was trying to do as he hid behind that mass of hair.

Cobain left behind a world where thousands of girls wanted to be with him and thousands of boys wanted to be him but his legacy lives on through his music and also his sartorial choices. He left behind a legacy that any rebellious young upstart can adhere too and one that will live long after we have passed away and the baton has been handed on to another generation.

He may never have wanted to be an icon, if anything; he became the anti-hero, a Shakespearian tale of tragedy for the modern era. The trouble is, icons don’t choose to be so, it is we who put them there and thus Cobain, his music and his clothes will forever be a part of the fashion tapestry.