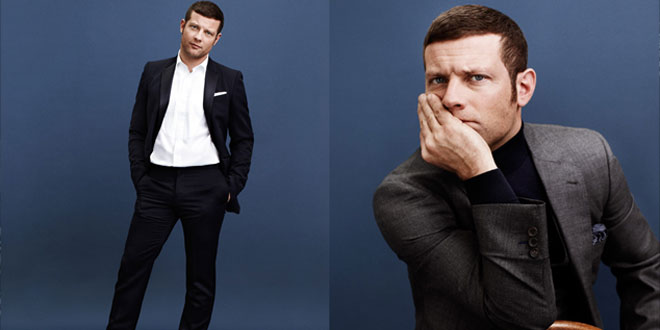 Last weekend saw the return of the X Factor to our screens. It also saw the return of one of britain’s most stylish gents and though he has good sartorial game, I’m not talking about Gary Barlow. Dermot O’Leary has been building himself a bit of a reputation in the last few years. Not just for being one of the best presenters on the box but for being a consistently very well dressed guy.

It also helps he has one of the best men’s stylist in the game, Mr Tom Stubbs. Stubbs has used the cream of super cool British men’s tailoring to get Mr O’Leary looking sharp. Thom Sweeney, Spencer Hart, Rake and E Tautz being the main of those in Dermot’s X Factor wardrobe. Even when it comes to formal shirt’s Dermot is setting the standards. He’s been wearing the “in” shirt of the moment – the tab collar from one of Jermyn Street’s finest, Emmett for the past few seasons on the show. Mr Barlow has only just caught on to the tab trend.

It also gives most of us average blokes the confidence to try and look our dapper best. You see Dermot isn’t the tallest of guys but it just goes to show when dressed well with the right combinations you can look sharp regardless of how tall you are. It’s that illusional thing that some stylist’s harp on about more than they should but it this case it rings true. Dermot does at times appear taller than he is just through a well tailored ensemble.

Analysing his formal style it’s very classic but with a modern edge. His signature look is outstanding. 3 piece Thom Sweeney with the u shape waistcoat, Emmett tab collar shirt and tie/ Handkerchief combination to finish. The outfit he wore last Saturday with the double breasted Thom Sweeney u shape waistcoat was in our opinion, on another level! As your more likely noticing O’Leary likes a bit of Thom Sweeney. There’s a definite Parallel about how both have their classic take on tailoring but add a contemporary twist. But what shows through more than anything they ooze style! Looking at his dress down which isn’t so much in the spot light there is a hint of Steve McQueen about it.Traditional, no nonsense menswear with style that seems effortless. Harrington jacket, roll neck, classic chinos, smart polo’s, suede loafers. Class.

I think that word sums up Dermot in a nutshell. How he comes across as a man and how he dresses as a man. It’s a real lesson to those in the lime light who feel they need to be outlandish and brash in what their wearing to look good and make a statement. Keeping it simple and dressing well sounds like a straight forward fundamental, but very few get this right. Dermot O’Leary is one of those few. He was recently crowned by GQ as their most stylish man of the year which was more than well deserved. This article pretty much backs up why.