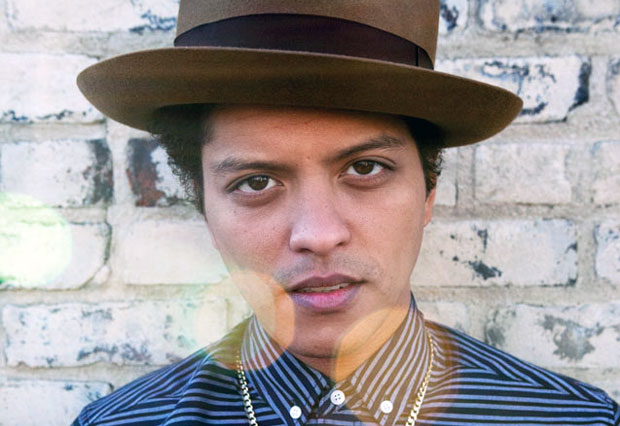 It’s hard to switch the radio on these days without hearing the sounds of Mr. Bruno Mars. Whether it be his smash hit “Locked out of Heaven”, or his recent chart topper “Gorilla” – Bruno is undeniably of the minute. Heavily influenced by the likes of Michael Jackson and Elvis Presley; Mr Mars has established himself as one of music’s hottest assets. The Hawaiian talent, who’s real name is Peter Gene Bayot Hernandez, has had an impressive four UK number ones, multiple sell out tours, plus collaborations with names such as: Eminem, B.O.B, Cee Lo Green, and Travie McCoy.

It’s clear to see Bruno has an exciting career that’s only getting better. But, as style enthusiasts what we are more engrossed in is his style. The ‘Gorilla’ singer is what some may describe as a ‘Fashion Killa’. In other words – he knows how to dress. Mars doesn’t just perform; he dominates the stage and absorbs his audience who get lost in his entertainment. His sense of style can be explained similarly. Despite his dress sense being varied from dapper suits to rock and roll outfits, Bruno regularly wears two key pieces to perfection – The Leather Biker Jacket and The Trilby Hat.

If you only ever buy one jacket, make it a leather biker. Rebellious yet sophisticated and classic yet modern. It’s self explanatory why Bruno is so fond of this style of jacket. Here at MFM we believe Bruno Mars gives Marlon Brando a run for his money when it comes to sporting a leather biker. A big claim we know, but by pouring over the below images you’ll understand why we feel so strongly.

With Michael Jackson being his biggest inspiration, it was inevitable Bruno was going to feel at home wearing a hat. Great headwear is something that is largely over looked by the majority of Gentlemen these days. As to why we’re unsure, considering back in the 60’s few men were seen without a hat. The Trilby is a classic, gentlemanly accessory that is a fine way of putting your own stamp on any outfit. Just take a look at how Bruno rocks a classic trilby in a contemporary, up to date manor.

By now we hope you have come to realise that Bruno Mars is one sartorial gentleman. It’s not just Leather Jackets and Trilby Hats that Bruno knows how to wear either. His all round sense of style is one of which we hugely admire. In this way, we have chosen two Bruno Mars inspired looks that’ll see you looking as rock n roll as the man himself.

Combining on trend items like the red and black tartan shirt and timeless pieces such as the Leather Biker Jacket. This is a clean, simple yet unmistakably cool look.

A sharp, masculine outfit that’ll show your Bruno Mars like fashion forward thinking whilst still being a relatively subtle look.

Sadly, the chances are we’ll never have the musical ability of Bruno Mars – nor the stardom. But if there is one thing we can do, It’s follow in his savvy footsteps in the hope we can look half as good as he does whilst on stage or anywhere else for that matter. So join us In taking our hats (trilby hats of course) off to the exceptionally accomplished Mr. Bruno Mars.