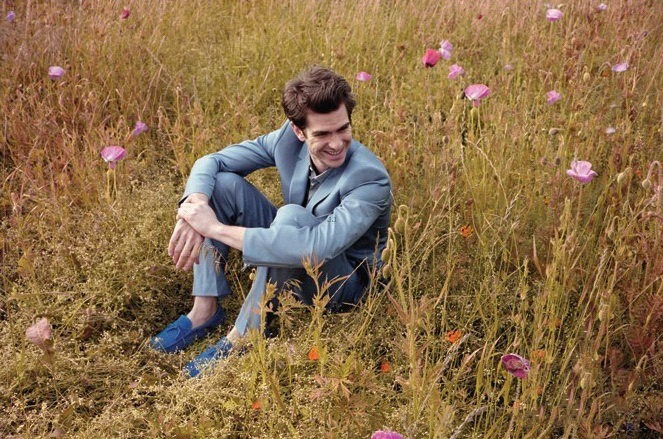 As The Amazing Spider-Man is hitting posters, buses and screens around the world I thought I would take a look at the man playing every boy’s dream role. The last few years has seen Andrew Garfield rise through the actor ranks, from staring in his first proper television role in Sugar Rush in 2005, to assisting the Doctor in defeating the Daleks in 2007, working alongside Heath Ledger in the 2009 movie, The Imaginarium of Doctor Parnassus, to award nominating performances in the emotional Never Let Me Go and The Social Network. Despite his success he has still not become a household name, something I am sure will change after this summer’s blockbuster.

A lot of attention has been focused on co-star and girlfriend, Emma Stone, who has been scoring some serious sartorial points this year, especially with THAT Ellie Sabb jumpsuit. Although Stone has been catapulted into the fashion atmosphere in recent months, the man that has been by her side both on screen and off deserves some style recognition. Master of both the formal red carpet and the laid back style of his photo calls, Andrew Garfield has yet to put a foot wrong.

The premiere in Tokyo gave the first look at the versatility of Garfield’s wardrobe. A laid back ensemble for the photo call consisting of tan chinos, a denim shirt and a striped Alexander McQueen jumper, subtly echoed the colour and detailing of Emma Stone’s Rue Du Mail dress. Complementing his belle seems right up Andrew’s street as he matched Stone’s powder blue dress with a dark blue suit and navy shirt at the Tokyo premiere.

Not every man can pull of lime green trousers, but at a press conference in Seoul, South Korea Andrew Garfield proved that he was just the man to do it. Pairing them with a muted checked shirt and his trusty wardrobe staple of a black leather jacket and trainers he was the embodiment of cool. Not to be out done in his formal attire the hero chose a plum suit with a blue and white check shirt.

It’s always nice when actors mix up their red carpet outfits and experiment with a range of different styles. Andrew Garfield is a fine example of such a gentleman. London saw a slightly more traditional approach by the 28 year old actor. A dark Tom Ford suit, navy silk tie and white shirt, was a stark contrast to his Madrid premiere attire. Although he looked slightly less formal for a red carpet event, he was no less a professional. He still kept his Madrid look formal by sticking to the classic tailoring that suits him so well, but made it a little more casual with a light toned suit, a pale blue open collar shirt and deck shoes.

Another city, another look at the Berlin photo call, Garfield looked more like he was promoting a remake of ‘Rebel Without A Cause’ with a black leather jacket (a popular reoccurrence) black skinnies and trainers. Ditching the tough, James Dean look for a slightly more preppy one works perfectly for the red carpet premier in Berlin. A Gucci checked jacket coupled with a grey jumper and white shirt and black tie offered a modern touch to a traditional premiere ensemble.

Perhaps one of my top outfits from Garfield to date is the burgundy Balenciaga suit he wore to the Paris premiere. A daring colour choice, especially with his on screen character spending most of his time in a red and blue lycra onesie!

Garfield’s laid back style is easy to replicate. A black leather jacket and black skinny jeans feature in many of his photo calls, Burberry and ASOS both offer similar jackets to give an edge to your day wear. Black skinny jeans were also a significant, easy to imitate Garfield staple.

Not afraid to add a splash of colour into his suits Andrew Garfield is definitely someone to look to when suit shopping. From the fashion forward Burgundy Balenciaga suit one day to a preppy cool look the next, Andrew Garfield is really matching the stakes of his fashion icon girlfriend, Emma Stone. He complements his co-stars perfectly, whilst creating outfits that are young, adventurous and incredibly stylish. It’s nice to see an actor mixing it up a little and not sticking with a safe black or grey suit. Not afraid to add colour, or take inspiration from a range of genres, Garfield’s look is definitely one to consider replicating.