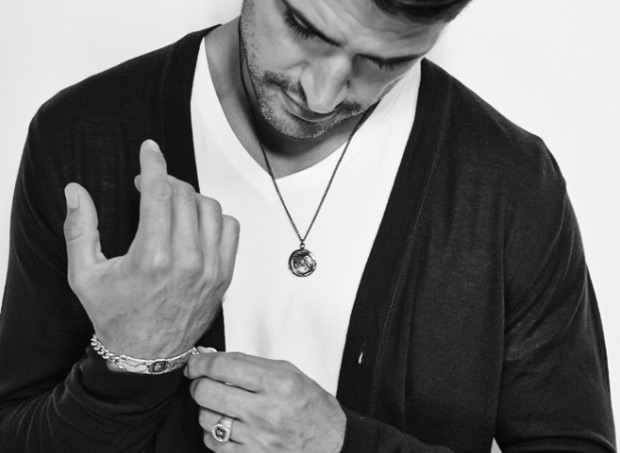 Routed in medieval history, Pyrrha Jewellery is a brand devoted to men, offering a variety of signature pieces based on ancient symbols, practices and language. It is rare to find a modern brand so intent on researching the past, but Pyrrha do exactly that and the results can be seen in the level of detail with which they design their products.

After being in business for the last twenty years, designers Danielle and Wade have built a cult following, including stars like Brad Pitt and One Direction’s Zayn Malik thanks to their unique style.

Made from reclaimed sterling silver, bronze and conflict-free precious and semi-precious stones, Pyrrha Jewellery has earned its loyal following through a commitment to producing high-quality, well-researched pieces that have very specific meanings through their symbolism. There is also a commitment to the environment – the packaging is recyclable as well as biodegradable and metals used are all reclaimed.

Despite being predominately unisex, the unique, historical designs have been very popular with male customers which has lead Pyrrah to produce cufflinks, tie bars and money clips alongside their signature talisman pendants.

The influence of historical artefacts, ranging from the 15th to the 19th century, plays a key role in the aesthetic of the brand, with one of their most popular designs being talisman pendants bearing 19th century wax seals, all featuring different symbols historically associated with a range of things.

Their Fleur de Lys Talisman, for example, features a design of the flower itself, that has throughout history been associated with royalty, purity and light, flanked by wings, which traditionally have been used to represent protection.

One of their newest ranges is a Game of Thrones inspired collection, made in partnership with HBO, which features several different pendant necklaces, all of which are cast in sterling silver and bronze.

With a vintage aesthetic, the collection is handcrafted in the team’s Vancouver studio and features references to the hit television series through the symbols and writing that appear on each pendant. Other collections include a 14k gold range, but all of them bear the brand’s signature historical influences.

Accessories can make or break an outfit and nowhere is this truer than for menswear. The wrong jewellery can ruin the hours spent on a look, but the unique look of  Pyrrha Jewellery is at the same time very special and will elevate any look.

If you’ve been toying with the idea of investing in some quality man-bling, this would be a good place to start. Pyrrha Jewellery is available in stores worldwide or on amazon.co.uk.