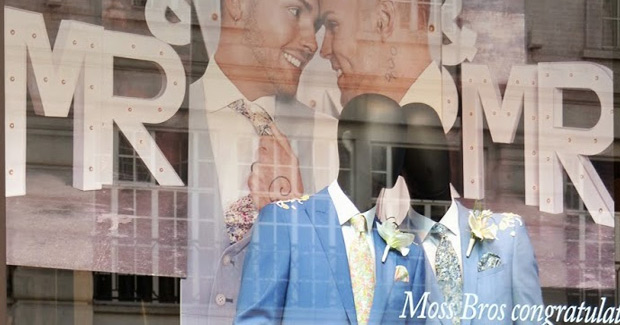 Moss Bros, a well-known company, bringing top fashion wedding styles to its customers, is changing. With its latest campaign, mannequins sit in their windows, both suited gentlemen with a background of Union J band member Jaymi Hensley and his fiancé Olly Maron. This campaign is a celebration of same sex marriages which, as of March 29th, is legal in both England Wales.

Chief Executive, Brian Brick has said that he wants the company to move away from being known as “old fashioned” and be known as more contemporary. This campaign shows that Moss Bros is “welcoming all couples in store for the most important day of their lives.” He very aptly says, “as we have done for the past eight generations.”

Moss Bros is one of the leading retail stores for weddings, dressing hundreds and merging contemporary styles to their thesis of classic. The campaign itself shows two male mannequins dressed in different shades of blue, accompanied by subtle ties and finished with brown shoes. 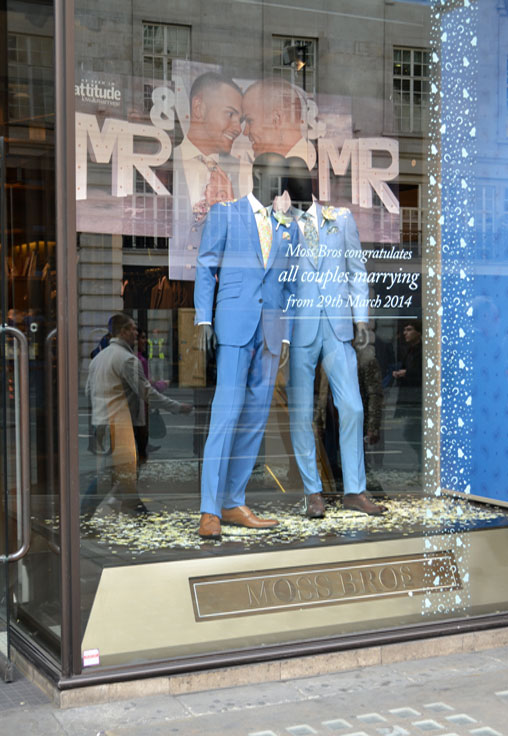 The colours – much like it were if it were a different sex marriage – complete each other. In the male and female wedding, the male wears a black suit and the female wears weight. Here, we have that same idea but transformed into a different kind of design.

Moss Bros is staying true to its core, which is style, but also allowing it to be seen by everyone. To highlight this, they are in association with Attitude Magazine. With this, they’re the fashion sponsor of their ‘Lover & Marriage’ special edition.

It just goes to show that love resides in the fashion world. Here at MFM we love fashion, fashion that moves with the times and explores new territories. At Moss Bros they love their customers, love their individuality and the fashion they have to offer for their weddings to be.