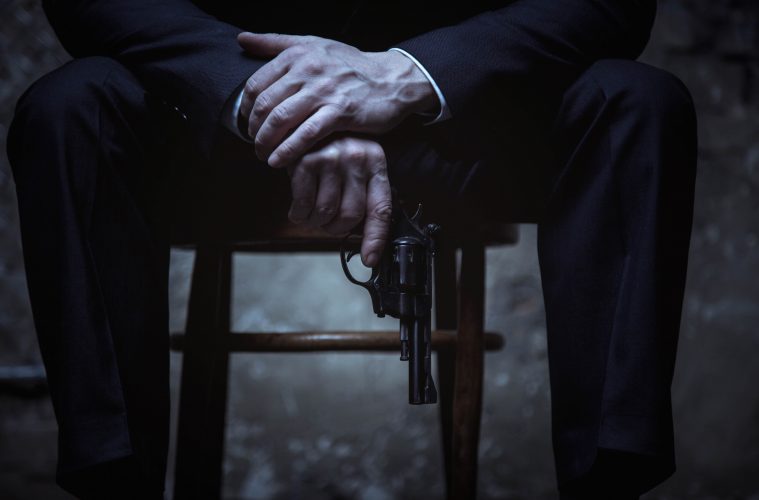 As the sinister season approaches, we wanted to recap on our favourite on-screen bad guys and talk about why they have earned a spot on our list.

Portrayed by the brilliant Christian Bale, the American Psycho lead, Patrick Bateman, is a young, wealthy socialite who leads a double life as a serial killer. His absorption and confidence leads the audience to have a love-hate relationship with the character. His arrogance and cocky attitude leads the audience to be drawn to his actions, and his kills become rather comical and disconnected. What’s more evil and conflicting than normalising the thought of murder?

Jude Law and Daniel Craig in Road to Perdition

Harlen Maguire is one of the main antagonists in the 2002 live action film, Road to Perdition, along with Connor Rooney. The king of revenge plots and plans his actions, become the expert of assassins.

Connor Rooney is known for brutalising and murdering his family’s enemies and anyone else who angers him. So pretty much being the family boss. Cut throat and powerful, this ruthless killer shows no mercy or remorse.

Sheriff George of Nottingham, otherwise better known as the Sheriff of Nottingham, is the main antagonist in the 1991 adventure-action film Robin Hood: Prince of Thieves. This conniving villain plots to kill our hero, Robin Hood, and marry his love Marian. As one of the most iconic Fictional villains on the list, he also holds the most iconic (and lengthy) deaths of all.

Jeremy Irons in The Lion King

Scar is the overall main antagonist of The Lion King franchise, serving as the main antagonist of Disney’s 32nd full-length animated feature film “The Lion King”. He is Mufasa’s jealous younger brother and Simba’s uncle-turned-arch-nemesis. Scar’s desire to rule Pride Rock drives him to enact a regicidal plot to kill both his brother and nephew to leave himself the sole royal in line for the throne as the “true” ruler. The breaker of every child’s heart, this cruel individual holds responsibility to the shattering of everyone’s childhood.

Christopher Lee in Lord of the Rings and Star Wars: Revenge of the Sith

Saruman the White is the secondary antagonist of the 1937 fantasy novel The Lord of the Rings​ by the late J.R.R Tolkien. He is a powerful wizard who is corrupted by Sauron and serves as his chief lieutenant during the War of the Ring.

Count Dooku, also known as Darth Tyranus, is the secondary antagonist of the Star Wars prequel trilogy. He was once a Jedi Knight and Yoda’s apprentice as well as Qui-Gon Jinn’s master, now he is secretly a powerful Sith Lord and the second apprentice of Darth Sidious and the Head of State of the Confederacy of Independent Systems.

Bane is one of the two main antagonists of The Dark Knight Rises, alongside Talia al Ghul. He was a ruthless terrorist and the field commander of the League of Shadows who sought to fulfill the destiny that the league’s founder Ra’s al Ghul had been previously determined to accomplish: the annihilation of Gotham City.

Cersei Lannister is one of the main antagonists of the Song of Ice and Fire book series and its television adaptation Game of Thrones. At the beginning of the series she is the Queen of the Seven Kingdoms. She specialises in incest and revenge, making her point throughout the series that family is everything.

Gary Oldman in The Fifth Element

Jean-Baptiste Emanuel Zorg is the central antagonist of the 1997 sci-fi action film The Fifth Element. He is secretly working for the Ultimate Evil, and is willing to use any means to reach his goals.

Amon Goeth is the main antagonist of the 1993 Steven Spielberg’s masterpiece Schindler’s List. He is a Junior Lieutenant, later Commander of the SS, responsible for ordering the liquidation of the Plazow ghetto and murdering Jews in the Krakow ghetto. He is based off of the real life Nazi of the same name. This bad guy is the peak of our list due to his unspeakable actions, and actions that speak from truth.

Lord Voldemort (born as Tom Marvolo Riddle), or simply Voldemort, is the main antagonist of the Harry Potter book and film franchise. He is the heir of Salazar Slytherin who was destined to open the Chamber of Secrets and purge Hogwarts from all Muggle-born students. Initially, Riddle’s goals were only to fulfill his role as Slytherin’s heir, but over time he expanded his ambitions into overtaking the entire wizard world and shape it under his and Slytherin’s supremacist views, becoming the most powerful Dark Wizard of all time and the lord of the Death Eaters in the process.