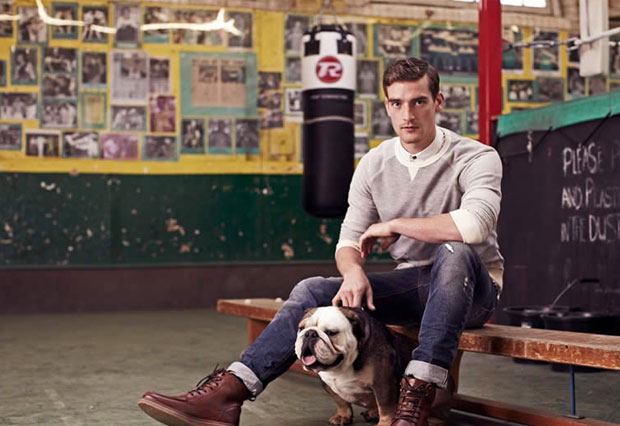 While menswear may have a deep-rooted tendency towards the more formal side of things, a man’s casual wardrobe is just as important in defining how stylish he may or may not be. In fact it’s often casualwear where a man is able to put an individual stamp on his looks and really begin to define his style.

When it comes to casualwear, comfort is often king but that doesn’t mean style should be left behind and today’s offering offers up both in equal and abundant measure. The simple sweatshirt is a true clothing classic and its sporting heritage ensures that this comfort is an ingrained feature that is inherently built into this timeless piece.

In terms of its style credentials, look no further than icons such as Paul Newman and JFK for just two gents who have turned to the sweatshirt to form a great base for their casual style. The sweatshirt is just that, a great base. Its versatility and simplicity make it perfect for working into looks as well as building them around.

How to Wear It

An established relaxed wardrobe staple, the sweatshirt should remain just that. If it hasn’t been clear so far, the sweatshirt is definitive casual wear. While it works underneath a blazer as a layering piece, it shouldn’t be used in any formal and possibly semi-formal setting – it sends a poor message, and in this case a knitted v or crew neck would be much more appropriate.

That being said, the sweatshirt has potential in a more smart-casual situation. Layered over an oxford shirt and underneath an unstructured blazer and you’ve got the beginnings of a great, relaxed business-casual look that is perfect dress-down Friday attire. Finish off the look with some tailored trousers, suede shoes and a pocket square.

Despite it’s ability to bring a dressed down twist on some smarter looks, going casual is the sweatshirts bread and butter, it’s what it’s been doing since its inception and it doesn’t better than almost anything else in the menswear arsenal. Pair it with another essential piece, the denim jacket, for a look that has a solid Americana base and workerwear aesthetic. Throw in a pair of chinos and some boots and you’ve got a superb off-duty ensemble that has exudes a wholly masculine feel.

Being such an iconic and classic piece, the sweatshirt is a great garment to being a twist to. Do this through a coloured or print variation during the summer to bring some character and personality to your casual warm weather wardrobe. Over a t-shirt, vest, shirt or simply on it’s own alongside a pair of tailored shorts and some great leather sandals or minimalist trainers and you’ve successfully assembled a look that will see you through the warmer climes with a bit of style.

Tailoring may be the marker of a men’s style credentials, especially when it comes to compiling best-dressed lists and the like but off-duty attire absolutely shouldn’t be passed off. The sweatshirt is one of the key items in the modern wardrobe due to the versatility, easy-wearing charm and quite simply great aesthetics it brings.

Or would you prefer they be left for their intended purpose, sport?