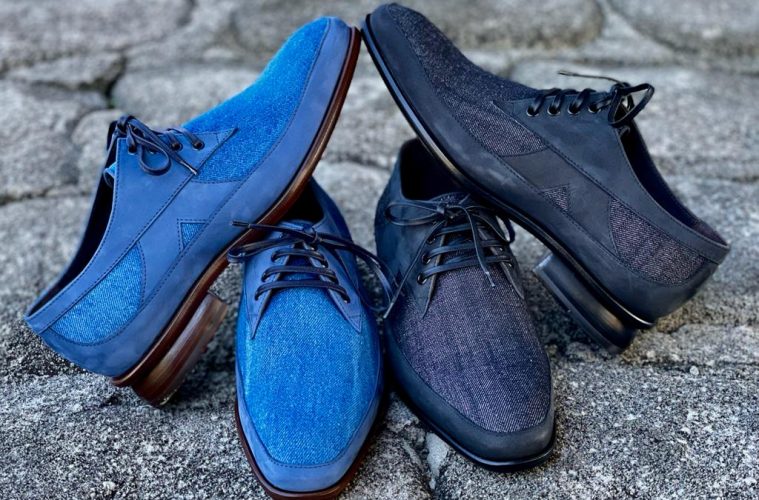 Mark Schwartz is the former creative director for Roger Vivier who over his 37 year career as a footwear designer has graced the top fashion runways of Milan, New York and Paris as well as front covers of magazines such as Vogue and Elle.  Over the years he has had the privilege of collaborating with fashion houses Gucci, Chanel, Balenciaga, Ralph Lauren, Marc Jacobs, Charles Jourdan Hermes to name but a few, as well as creating bespoke footwear by request for celebrities including Jackie Kennedy Onassis, Madonna, Oprah, Sharon Stone, Julia Roberts, Lady Gaga, Katy Perry, JLO and former first lady Hilary Clinton, plus many more.

Whilst his closest peers Christian Louboutin and Manolo Blahnik had spent their careers aiming for fame and recognition, whilst the ever shy, Mark Schwartz preferred to remain in the background. Although his women’s shoes were adored, you could say he was the Banksy of the Shoe industry, to the point that Oprah Winfrey even once stopped mid interview during one of her shows and said, “let’s not talk about this anymore, let’s talk about my boots”. At which point she got up and gave her infamous Oprah twirl and said “I don’t know who Mark Schwartz is but I love his shoes”.

Having spent years designing and creating beautiful bespoke shoes for women, Schwartz has decided to concentrate his efforts on men’s shoes, although he still takes private women’s shoe commissions for the rich and famous.

His new Spring / Summer 2021 collection is all about colour and definition. He says one of the driving forces behind this collection was on the back of the new covid vaccinations and moving in the direction towards a global brighter future. This is very visible in the vivid China red colour of his suede chip loafer as well as the vibrate azure blue and rich taupe in this collection.

In keeping with the Azure blue and taupe, is the Charlz boot which is Schwartz’s take on the classic chukka boot, made with the same a soft nabuk suede. The Charlz is also available in a two-tone green a taupe as well as the blue combination. For those who prefer a lace up shoe, the Dart shoe offers a twist on the classic signature Mark Schwartz lace up and offers a denim and suede mix to give a subtle and versatile transition from Spring into Summer as well as from a casual to a dress shoe. The Dart is available in in both blue suede denim mix and black.

This collection is named the La Mia Vita collection as Schwartz feels the inspiration has been taken from many different aspects of his life including current issues that have impacted the lives of so many over the last year and feels there is a shoe within the collection that everyone can relate to in some form.

Having spent many years being mentored by his good friend and artist Andy Warhol, it was also very important to Schwartz that this collection reflects upon his artwork of which he is very passionate about and sells under the www.highheeledart.com umbrella. This collection also comprises of both boots and loafers using a weatherproofed durable canvas to give an artsy feel, which has been screen printed using his original hand-painted designs.

Schwartz says “This is a very personal collection for me, as not only can I now wear my own shoes, but I have managed to encapsule my love of art and passion for design. Andy (Warhol) and I used to sit in my office doodling on magazines talking about how much fun it might be to physically have some of our paintings on actual shoes. Nobody else is doing this and it is something I intend to continue exploring within my future collections. Looking at the collection this aspect part of the collection Schwartz agrees that it has an unintentional Jackson Pollock feel.

“Men’s footwear as a rule does not always have the scope to be as adventurous and playful as women’s shoes and so this is something I want to change as men too should have the opportunity to express themselves as much or as little as they please via their fashion choices”.

All his men’s shoes are hand made to order in Florence, Italy with Mr Schwartz overseeing every stitch to create the perfect custom men’s shoe.  The La Mia Vita Collection starts from $595 and is available on pre-order from www.markschwartzmensshoes.com