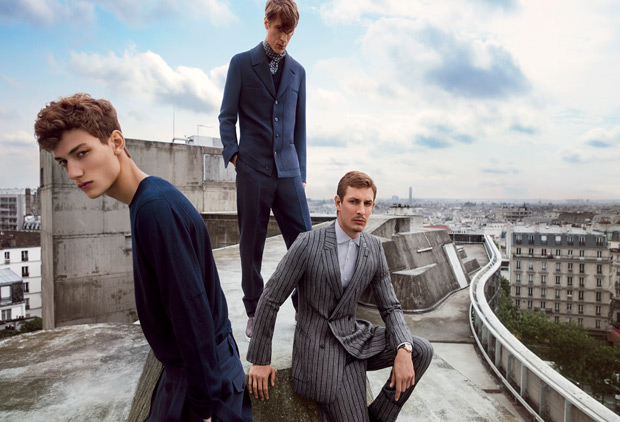 Architecture has always been a strong influence for Ermenegildo Zegna as a brand, and the advertising campaign for their SS15 menswear continues the use of it as inspiration. The relationship between architecture and space, which was the original inspiration for the SS15 fashion show, has now been channelled into the campaign imagery through the focus on location according to Stefano Pilati, Head of Design for the house.

Photographed by legendary photographers Inez and Vinoodh, the campaign imagery sees models prowling rooftops of an urban landscape, the skyline of which forms an appropriate background to a collection that is so influenced by urban architecture.

Fans of the brand will be familiar with the now signature graphic layout of the images, but the evolved silhouette of the clothes brings a modernity and contemporary feel to the campaign, as does the blend of colour, texture and stripes featured.

References to the cinematography of renowned German director Wim Wenders can be seen in the images, which have an, almost, characteristically romantic feel about them. This softer side to the images, mirrored in the soft shades of blue and grey in the clothes, is contrasted with the industrial, bustling cityscape of the backdrop, and this relationship between the soft and the strong forms the central focus of the campaign.

Softer shoulders, oversized cuts and slouchy trousers capture the relaxed approach to tailoring for Ermenegildo Zegna this season, and the trainers hint at the continued prominence of casual sportswear which has appeared both in designer collections and also on the high street.

The softer tailoring and oversized coats make for a refreshing take on menswear and men’s formalwear from the brand, which trades a lot on its heritage. Instead of sticking rigidly to classic cuts, the designers at Zegna aren’t afraid to try new things and change things up which certainly makes men’s suiting a more interesting affair than it sometimes can be.