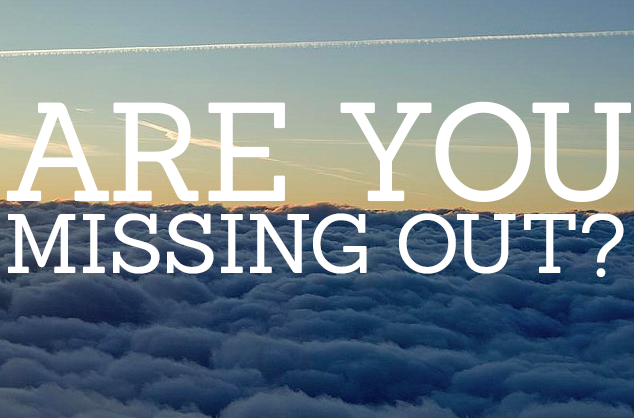 Do You Have A Fear Of Missing Out?

Having lived in London for the past three or so years, I have found myself facing an infuriating issue on an almost weekly, if not daily basis. Most of my weeks start with a remarkably empty diary, filled only with mundane tasks and the odd reminder. By lunchtime, it’s all started to go a bit wrong.

Now don’t misunderstand me. This isn’t me stating that work has gone insane, or that my lunch has been ruined by some unforeseen disaster. It’s more the realisation that, throughout the morning, as I’ve arranged meetings with friends, and reminded myself about upcoming parties on the weekend, I’ve managed to book up 95% of my free time. ‘What’s the problem?’ I hear you cry. Well, you see, it is always at this point, without fail, that a second round of invitations and requests for a catch-up will appear in my inbox, leaving me in the unenviable situation of trying to manage an oversubscribed social life with a daunting fear of FOMO.

For those of you who don’t know what FOMO is, allow me to explain. FOMO is the cool kids way of saying ‘Fear Of Missing Out’, which is pretty self-explanatory…isn’t it? No? Ok, well the term relates to the feeling that can creep up on you when you’re invited to two parties on the same evening and have the realisation that there’s no way you’ll be able to attend both bashes. There are several stages of FOMO that all sufferers go through.

The first stage occurs as you force yourself to make a decision over which party to attend, even though different friends will be at both bashes, and one party will, no doubt, be ten times better than the other.

Stage two of the fear usually takes a deeper hold as you discuss the party on social media throughout the week, making plans with friends and trying to convince people to amend their alternative plans.

Finally, the ultimate stage of fear latches on once you find yourself standing in the kitchen of your chosen house party, only to receive a text from your other friends, showing you the ‘immense’ fun they’re having without you. 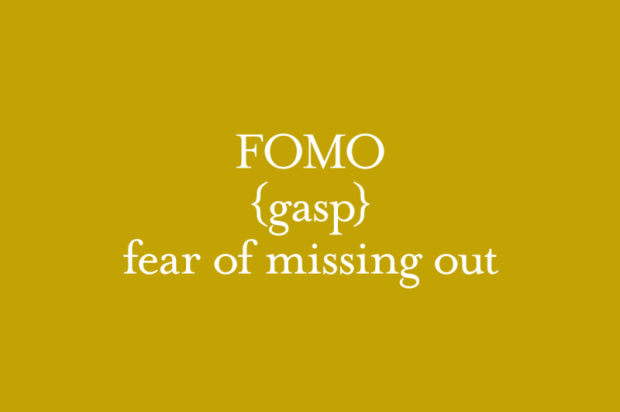 So what do you do? Do you ignore the message, or do you send one back of you hugging the piñata that you just stole from the garden in an attempt to make your friends question their decisions. If, like me, you suffer from FOMO, you’ll have already given some serious thought to skipping out on the current party to trek across town and fight with the late night drunken crowds to find your friends, just to share in their joy for a while. Crazy right? Unfortunately, that is the impact that FOMO can potentially have one someone.

It’s not just parties that can encourage FOMO. Anything from coffee catch ups to a chance encounter in the park can spark FOMO in someone, as they worry about what they’ve not been invited to. For those that suffer, FOMO is a constant worry in the back of the mind that they are missing out on something ‘awesome’ that might be occurring somewhere else. Quite often, they won’t know what this something is – they just know that it could be occurring without them.  (Note the could – there isn’t necessarily always something going on, but that doesn’t stop the fear sparking up).

The Fear Of Missing Out

The fear can drive people to constantly check their phone, even when they’re out with other people, to see what else is occurring, where their friends are, and whether people might be having more fun than them elsewhere. It also means that they’ll regularly double, triple or even quadruple book themselves on any given evening to ensure that they’re in the know about everything. (You don’t know the first thing about multitasking until you’ve witnessed a friend with FOMO plan a triple booked night out). With the rise of smartphones, social media and the urge to be connected at all times affecting an increasing number of people, the rise of FOMO should not come as a surprise to any of us. However, what should be concerning us is the potential impact that FOMO is having on our friendships and relationships.

As we attempt to fit a growing number of social events and activities into our daily lives, we are limiting the amount of time we allow ourselves to spend with our nearest and dearest. Where once catch up drinks would have meant an evening down the pub, or a leisurely dinner with a few cocktails, it now means a quick pint, perhaps two at a push, and a half arsed attempt at an excuse before you dash off to meet another friend. Whilst for those with FOMO, that might not seem like such an awful thing, for those lucky enough not to be inflicted with the fear, it can actually be seen as a slap in the face. After all, they’ve made the effort to clear their diary to spend time with you, so why on earth shouldn’t you? Whilst you’ll take away the memory of a good, swift catchup, they’ll potentially take aware hurt feelings and resentment towards you and your apparent lack of care. The chances of them then being available next time to meet you are lessened, and from there, you might as well watch your friendship get washed down the plug hole. The same can be said for potential relationships. Jumping ship on a night out with friends for the opportunity to potentially meet Mr Right somewhere else might seem exciting at the time, but it’ll likely leave you feeling lonelier in the long run as you could end up without Mr Right, or your friends, by your side as you were never where you were meant to be.

It is worth highlighting that FOMO can also have some fantastic, and unexpected consequences. Running around town and throwing yourself into every activity you can get your hands on can actually result in chance encounters with incredible people and life changing opportunities. Pushing yourself to get out there every day can actually be an incredible bringer of change. However, it’s important to remember that whilst making new friends is fantastic, it’s important to keep your old friends closer. Whilst living the social highlife may have its great moments, it’s worth remembering that it’s often the smaller, quieter and more personal events that shape our friendships and, to a certain (vomit inducing) extent, ourselves. Our friends are the people that will always be there for when you need them, so make the time to be there for them.

Stop double or triple booking yourself, make time for people, and if you’re really desperate to see everyone, then host a party yourself. Not only will everyone be there, you also won’t have to dash off anywhere else, meaning that you’ll be able to enjoy yourself for once.

I’ll be expecting an invite!