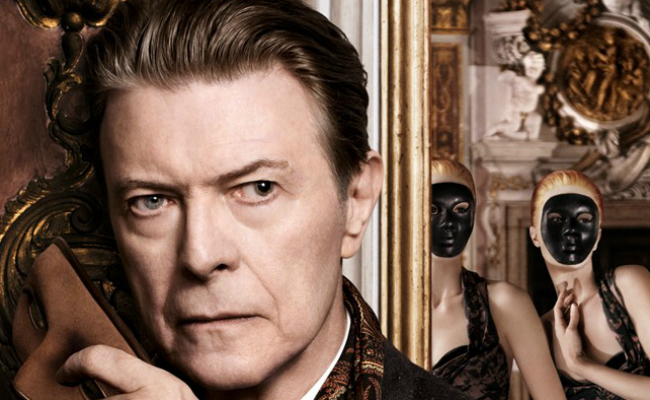 In September we mentioned that David Bowie was to become the face to grace the high end label Louis Vuitton as the brands super cool and legendary front man. Well finally some of this images have been released alongside a short 15 second preview clip of the feature video to be released on the 7th of November. Bowie is no stranger to costumes, disguises and playing dress up, and for Louis Vuitton’s end-of-year campaign the singer acts out his most high-fashion role yet.

This is no small campaign as the folks over at Louis Vuitton have planned a full advertising assault including a shirt film, TV commercials, a new app and print ads all falling under the name of ‘L’Invitation au Voyage’. In the short film we see Bowie performing a unique version of I’d Rather Be High while playing the harpsichord. Alongside this he is also seen to be serenading model Arizona Muse as she lands in Venice’s Piazza San Marco via hot air balloon.

This has to be one of the most highly anticipated advertising campaigns yet, and with such big names as well it is bound to be a roaring success. As mentioned before the short film is launched on the 7th of November via the Louis Vuitton app so we would recommend downloading it now in preparation. Check out the 15 second preview clip below.