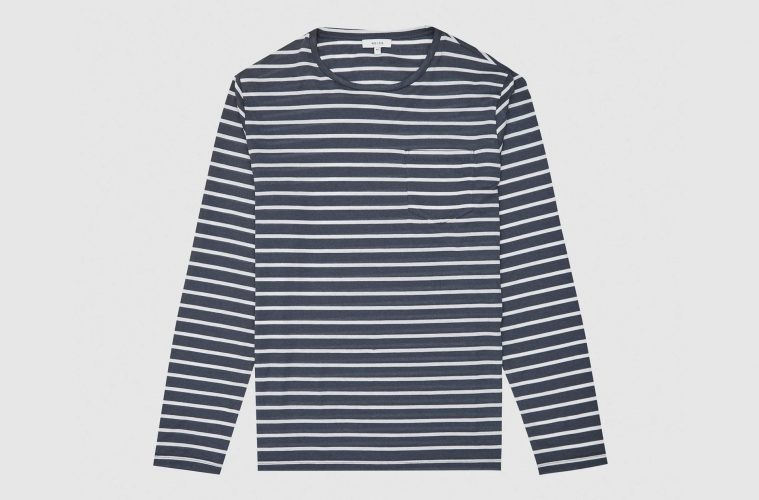 Breton Stripe, A History And Where To Buy

Breton stripes have been a staple in many wardrobes for decades now and it’s easy to see why, but where does the Breton stripe come from?

The Breton stripe shirt was first introduced in 1858 as the uniform for French Navy seaman in Northern France. It originally featured 21 stripes, one for each of Napoleon’s victories. The stripes also made it easier to spot sailors who had fallen overboard. Since then, its purpose has been slightly less dramatic and more fashion-forward, and for that, we can thank Coco Chanel. She took a trip to the French Coast and noticed the sailors wearing their Breton t-shirts, inspired by the simple design, she decided to incorporate it into her 1917 Nautical collection, forever changing the face of women’s fashion.

Since then it has continued to grow in popularity and has been worn by some of the most famous people on the planet. James Dean famously wore the instantly recognisable stripe during his 1955 film Rebel Without A Cause, and Pablo Picasso was frequently photographed wearing his many variations of the stripe.

The beauty of this design, for me at least, is its simplicity. It is, without doubt, the most versatile, most flattering and most accessible design on the market. Its ability to work with any outfit is something other designs struggle to do. Worn with jeans and an overshirt or under a navy blazer, it’s a foolproof way of adding an interesting touch to any outfit.

They can be found in almost every High Street or Designer store but for if you want quality, heritage and the perfect fit, look no further than Armor Lux, these guys certainly know what makes a great Breton. Their range of colour options means there’s a top for every situation, I won’t judge if you buy one for every day of the week.