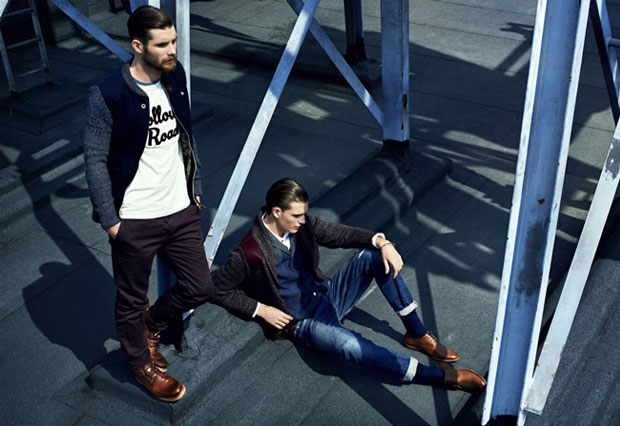 River Island have always been fond of reworking old styles, as with any brand that breathes life into something initially seen as ‘stale’ they need to stay on top of their game. Their in-house menswear ‘brand’ known as Holloway Road is something of a trendsetter in its own right. This collection consists of great looking, great quality pieces that all take inspiration from this idea of ‘heritage’ garments. This season in particular sees many heritage classic reworked for AW13, and here at MFM we are getting a little bit excited.

It was in 1948 that Bernard Lewis founded what would later become River Island initially as a wool shop based in a lock-up garage in the East End, and then later opening a small but sturdier premises on Holloway Road in north London. Originally Bernard traded under the name of ‘Lewis Separates’ selling high quality working menswear. It was only seven years later that Mr Lewis decided to aim for something more ambitious and turn his little shop in a fully fledged label, designing and selling its own clothing ranges. This brand ethos has been carried through to ‘Holloway Road’ taking its name from the shops original location, to where it is today still creating range of classically rugged comfortable menswear pieces while still maintain a contemporary edge.

This AW13 season has to be one of its best yet, with nods to earthy, blue collar style work wear but clearly maintaining the modernity of the pieces. Many of this seasons colour palettes are noted nicely such as camel browns and rust reds that make up this stylishly understated colour palette. There is a distressed and washed out feel to many of the pieces including the denim and even the t-shirts and sweatshirts. River Island has been known to up the price a little more than necessary, but you get what you pay for and that can definitely be said for Holloway Road. These are high quality pieces and they are affordable prices, even some of the t-shirts start of at around £18.

Despite my individual love for the look of an English gent, even I must admit I have developed a soft spot for understated menswear such as this. There are loose denim shirts (which I think would look great with a bow tie!) chunky zip-up hoodies which we all love this time of year. Many of the finer details featured on some pieces include hints of leather and suede which add another masculine touch to the Holloway menswear pieces. Elbow patches and distressed denim are perfect for this season, as we are constantly telling you that there are many ways to wear different pieces; many which don’t include how the brand originally intended. We can’t goon enough about how much we like the range, so why not take a look at some of our favourite pieces below and judge for yourself.

The great thing about River Island’s Holloway Road brand is how much versatility it has and how flexible the pieces are when it comes to adding them into your own wardrobe. Here at MFM we are long standing fans of River Island and we always look forward to another round of Holloway Road pieces, and you can be assured that many of us have already invested in a number of these great pieces of menswear. Seasons are changing and it is getting colder, and this collection is full of great transitional pieces to help you through from season to season. So what are you waiting for? Join in with us at MFM and grab some modern versions of classic heritage pieces.