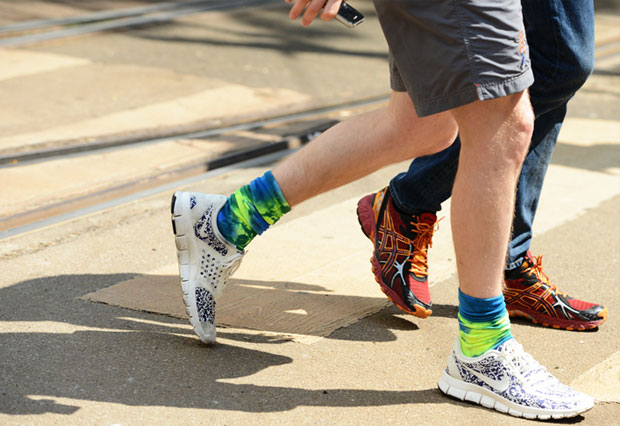 Fifteen years ago, if you were wearing trainers with your suit, the likelihood was, you had just finished a hard days graft in the office and wanted something comfortable to support those aching feet as you stood crammed amongst the masses on the tube or you had just been down the gym. No self respecting gent ever wore trainers outside of their sporting / recreational confines. The trainer was for lads about town (think Oasis and Blur in their Adidas Gazelles), hip-hop stars in Reebok Pump hi-tops or indie kids with once white Converse All-Stars that had been mired in the depths of a thousand beer soaked mosh-pits.

Oh how times have changed.

The advent of street-style and its emergence into the mainstream social consciousness has heralded the trainer as the modern king of any self discerning fashionista. It is impossible to escape its relevance to contemporary fashion.

Everywhere you look you will see men who have never played sport or never been to a gym wearing a pair of trainers with skinny jeans, slim cut suits or if the British climate allows, a pair of tailored shorts that were once the preserve of golfers the length and breadth of the country.

It doesn’t matter if it’s on the high street – Size?, Offspring and JD Sports to name but a few – or sauntering along the catwalks – Valentino, Raf Simons and James Long have all taken inspiration from the urban playground in recent collections – the trainer is having its moment in the sartorial spotlight.

It is a far cry from its humble beginnings in the early 1900’s when Converse took the name of famous basketball player Chuck Taylor to create a sport shoe that in the past century has become iconic not just in sporting parlance but in the music industry where the famous hi-top has strutted across stages worldwide upon the feet of music luminaries including The Ramones, The Strokes and Snoop Dogg.

However, it wasn’t until the late 1970’s and 80’s that the trainer truly found itself immersed in the social psyche thanks to hi-hop artists such as Grandmaster Flash and Run DMC (who penned the hit ‘My Adidas’ in homage to their favourite sneaker brand), football casuals with their Diadora Borg Elites (named after legendary tennis star Bjorn Borg) and the emergence of basketball supremo Michael Jordan who almost single handedly turned the Nike brand into the sporting apparel behemoth we know today.

Jordan may have slam-dunked the trainer into the 21st century but it has only been in the last couple of years that the fashion industry has taken this sporting footwear to its heart and we now see designers, magazine editors, bloggers and photographers the world over embracing the trainer.

Every season when the catwalk shows come around the fashion glitterati will be out in force and you can guarantee their will be trainers aplenty. From the hippest of cats at leading Swedish outfitters Tres Bien to the street style kids and everyone in between, the contemporary trainer has become an integral part to any gents wardrobe.

Mr. Porter: If ever you wanted proof that the trainer is now made for fashion as well as the gym and sporting arenas, look no further than the Mr. Porter site. Valentino camo trainers, Raf Simons X Adidas collaborations and Missoni with all their colourful exuberance can be found mixing it alongside the bastions of footwear brands including Nike, Converse and Saucony, creating a melting pot of fashion and functionality which transcend the sport / fashion divide.

Size?: Want to get the latest drop on the Nike Fly knit? Need that new colourway on the New Balance? Want to don those Vans Skate Hi like you’re skating sun-bleached concrete bowls in 1970’s California? Then look no further than Size?

Topman: If trainers are on the shelves in Topman, you know they’re in style. Never one to miss a fashion trick and quick to realise what’s hot and what’s not, Topman once again prove why when it comes to high-street fashion, no one does it better. Whether it’s their own range or other well known trainer labels, Topman can always be relied upon to lead the way.

Matches: Another great shopping destination for anyone looking for high end trainers. Ami, Burberry Prorsum, Gucci and Lanvin can all be found on the pages of this fantastic website and if you want to stand out from the crowd, there really is no better place to find yourself some exclusive trainers. Just don’t wear them down the gym.

If Chuck Taylor were alive today he wouldn’t believe the evolution of the trainer and it’s standing in the world of fashion. It is almost impossible to look at a fashion blog today – Jak & Jil, The Sartorialist, Facehunter et al – without a picture of someone’s sockless ankles and a pair of trainers adorning their feet.

The past couple of years have seen the trainer become de rigueur for any man who wants to walk the street leading the way rather than following the crowd and the trend shows no sign of abating just yet. So whether you’re running for the train after a hard day at the office or heading to the gym, there really is no excuse for not owning a pair of trainers.