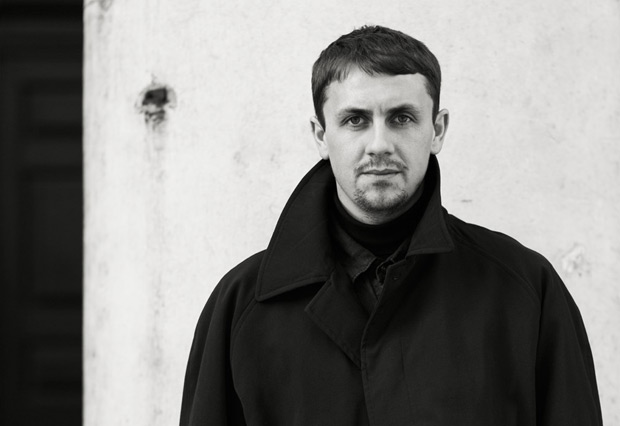 An Interview with Matthew Miller

A definite MFM favourite, Matthew Miller never fails to impress with his politically charged, edgy shows. After last season’s exploration of decay, rebellion and politics, this season Miller guided us through an incredibly creative collection inspired by soldiers returning from the war.

If there was ever a way to showcase ones creativity it surely has to be by limiting your resources. Something Mr. Miller gave us all a schooling with, by using pretty much one fabric for his whole collection. Picking a difficult fabric choice only enhanced his reputation for forward thinking.

Pinstripe is something we see rarely outside of the banking sector, with flash backs of Gordon Gekko and Patrick Bateman usually what we associate with the fabric, which is a real shame for something that can be so elegant and striking as Matthew Miller once again reminded us.

The collection was very striking in its presentation. It’s not often you see head to toe pinstripe when it’s not in a suit, however all the elements of the outfits could fit easily into your everyday wardrobe, with his patchwork reversed selvedge denim, blazer and a biker jacket particular favourites with team MFM.

We caught up with Matthew Miller after his SS15 show ‘Introversion’ to get the low down on the collection, the inspiration and what Matthew is going to get up to now the show is over.

So is it a bit of a relief now the show is over Matthew?

Yeah definitely, I didn’t watch any of the football last night I was fucking doing that!

Is it a relief after the show has finished or do you find yourself wanting to tinker?

No that’s it, I’m going to go on a three day bender now.

That sounds decent! In terms of the collection, you used the pinstripe fabric really heavily, was that a challenge creating a whole collection from almost only one material?

If you try and create something out of pinstripe people automatically think classic, so how do you modernise it? For a start, it’s really difficult, it’s a really difficult fabric, only certain men can pull it off, it’s not seen as very youthful, so it’s like how do you modernise it? it’s been left behind in the 90’s I think, it’s very, very rarely you see pinstripe these days, maybe around Liverpool St. with the bankers, but again it’s not even popular with them, it’s not a massive thing like it used to be. I just wanted to bring it up to date and make it a bit more modern, if you shred it, like that graphic mesh it looks military, It looks like the… Have you ever seen the camouflage on battleships?

So all of a sudden that becomes a military reference.

Your last collection, was very much military inspired wasn’t it?
Yeah it’s menswear, we all wear stuff that’s formed from military gear, whether it’s a sweatshirt for training in, or even a suit for battle, we’re all wearing it one way or another.

We noticed you used quite a few models you’ve used previously, is that a conscious decision?

I mean it’s all about getting a model that fits the clothes well, it’s getting a model who looks good. I mean I work with Sarah Bunter who does my castings, she works hard on that side of things, and then it comes to a point where I just say yes or no really; generally I do a yes or no based on the fit.

When designing a collection do you have any body in particular in mind? A model perhaps?

I don’t to be honest with you, I design every collection based on the initial research and idea, and then the guy comes in afterwards and I speak to the stylist and we speak to everyone and try to find the right guy to fit that. I don’t really design with a guy in mind as such, more concept based.

Where did you find the concept for this collection? Is there a particular story behind that?

Again I think my designing is always through osmosis, it’s all about what’s going on at the moment. At the moment there’s so much war going on you can’t help thinking about it. So I started researching war photographers and their images, so it started with the 40s and de-mob suit’s, then the 60s 70s 80s and it was going to go really utilitarian, but I brought it back because it would have been easy to do that and I wanted to explore the romance of post war imagery and what a solider is like after he’s come back from the war which I don’t think many people have done..

It’s certainly something we’ve never seen before, we saw a lot of patches on the collection are those velcro? Last season you had the spray on slogans?

Yeah yeah, it says anti-war, the other says anti-social, and then anti-you, you can change them around.

No, no, I think it’s time to wipe the slate clean…

And go on a three day bender and start again?

Yeah! I’ll have a think about it in a couple of weeks, right now it’s far too close to even realise.

Well thank you for talking to us Matthew, enjoy the rest of your LC:M.

No problem at all, thank you.