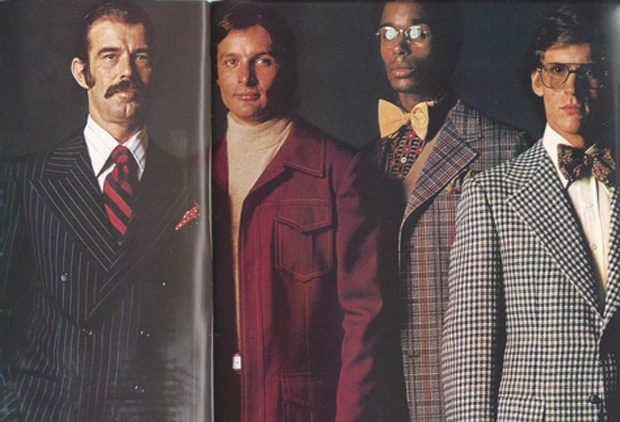 In this week’s a decade in fashion article, we take a look at the 1970s where style was relaxed and everything was groovy baby.  The seventies are best known for the hippie chic way of dressing and how love was a free for all. 1970s fashion trends represent the rebellion against the old guard that began with the hippie movement of the ’60s. The laidback lifestyles of the hippie movement inspired the birth of the “leisure suit,” boho style dressing and preference for all-natural materials in the ’70s. However, the all-natural aesthetic was rejected by the nightlife loving disco fiends who wore synthetic materials like polyester and Ultra suede to shimmy and shake on the dance floor. 1970s fashion rejected formality in favour of function. This trend for “casual dressing” is what arguably laid the foundation for 1980s, 1990s and 2000s dressing. The return to everyday formal wear, except in the work place or at high profile events, has yet to return. We have the 1970s to thank for chic, classic comfort that’s versatile and easy to wear.

Many young people had become dissatisfied with the prevailing mainstream social bargains, considering them to be shallow and materialistic.  Storm strongly opposed any involvement in the Vietnam War and called for a greater concern nature.  Whatever their motivation, many young people in the early 1970s adhered to newfound values of peace, love and freedom and sought an alternative hippie way of life.

Many people embraced communal living and a nomadic lifestyle, as well as exploring eastern religions island experimenting with drugs and adopting a rebellious style dress.  The clothing styles and fabrics of the time were inspired by non western cultures such as Indian and African.  Natural fabrics and tie dyed and Paisley prints were also popular.  Many people became fond of creating their own handmade clothes and accessories, and would personalise such items using decorative beading and fringe.  Bare feet and sandals were a trademark of fashion at the time and flowers and peace signs became symbols of the seventies movement.

Television, film and music in the seventies became a powerful force on fashion.  The television programme Charlie’s angels spurred the demand for flared trousers while music stars like David Bowie influenced the sparkly and glittery style of glam rock.  Disco music spawned its own fashion craze in the mid seventies.  Younger people flocked to the nightclubs and dressed in the new disco clothing style that was designed to show off the body and shine under the disco lights.  This new style of eveningwear was usually made from stretchy fabrics such as Lycra and spandex or synthetic polyester decorated with sequins.  Men’s disco wear included open necked satin shirts and flared trousers, in the same style as John Travolta in Saturday night fever.

Men’s fashion became bolder and daring throughout the seventies, the hippie style that spilled over from the 60’s crossed over into the fashion of both sexes.  Men started to wear colourful ties and bright fitted shirts with big collars.  Many men grew short beards, sideburns or moustaches and let their hair grow longer.  Flared trousers were hugely popular throughout the decade ranging from a subtle flare to large flapping bell bottoms.  By the end of the seventies however, trouser legs had gradually straightened again.

You may have noticed that bold colours, Paisley prints and similar styles already back on trend.  The seventies currently one of the many trends influencing our styles today, so creating a seventies inspired outfit should be relatively easy to do.  Check out the styles below and see if you fancy adding some seventies influence to your wardrobe.

These outfits might seem slightly outrageous but that was what the seventies were all about. You can quite easily alter or tame these looks to suit your current style, we are by no means encouraging you to go out and get an afro unless it suggests that kind of dress code on a party invite. What do you like about the seventies, who of you remember it the first time round and has much changed? Let us know in the comments below.