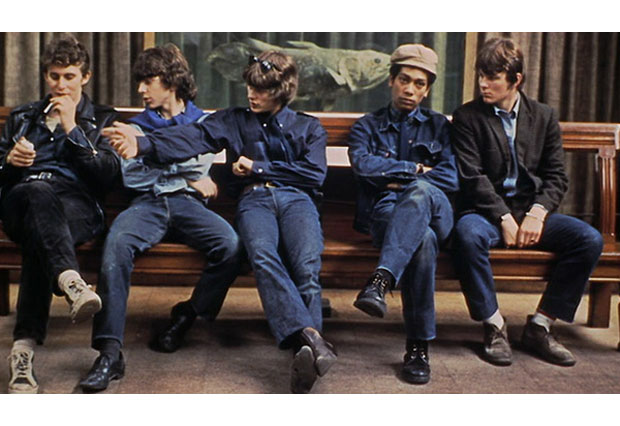 This week in our ‘a decade in fashion’ series we find ourselves in the 1960’s, a decade that broke many fashion traditions mirroring the evolution in style that was clearly happening. Male fashion of the 60’s was dominated by change and progress. There was a clear departure from the simple crisp looks of decades past, as the 60’s began to create a newer approach to style and fashion. Up until this point, as you can see from the previous articles, men’s fashion had been quite formal. So pronounced were the changes in style that it was impossible not to notice how the conservativeness of decades past has given way to a much more energetic and lively way of dress.

This was a time when the British Music scene enjoyed immense popularity, Artists such as ‘The Beatles’ brought with them so much more then music. They transformed the conservative business suit into a clean, straight cut and generally more stylish wardrobe essential. In general suits were slimmer with narrowed pants, super tailored shirts leaving the wearer with a much sleeker silhouette. As the decade progressed, ‘The Beatles’ embraced a more casual approach to their look and began wearing turtlenecks and embracing more colour in favour of their earlier all black stage outfits. These kinds of mod styles may well stand out as one of the decades more influential look, and even today these details still inspire men’s fashion designers.

Later on in the 60’s saw the arrival of more extravagant details that changed the face of men’s fashion. In addition to wearing their hair longer, men began to gravitate towards vibrant colours and borderline obnoxious prints such as paisley, floral and polka dot. Even jewellery designers joined I the fun and began creating collection made specifically with men in mind. This newfound freedom in fashion may have seemed quite experimental at first, but it soon became the norm and men all over the world began to embrace this way of dress with enthusiasm and a new appreciation for male style.

No fashionable decade is without its key pieces, and the 60’s was even more defining than previous decades. There are always pieces and key details that make their mark, and make repeat appearances in many of today’s styles and catwalk collections.

Nehru Collars: this detail appeared on both shirts and jackets; this upright mandarin style collar was first popularised in India before transitioning to Europe. Its mainstream popularity came as a result of bands like The Beatles and The Monkees adopting this style for stage performances. This kind of collar can still be seen in many men’s fashion pieces today.

Tie Dye: this is one of the 60’s more unfortunate styles that still linger around even today. It is a vivid highlight of the burgeoning hippie movement that began in the late 60’s. Tie dye t-shirts were particularly popular amongst the youth of the time, looking to express themselves in a freer and less restricted way.

Bell Bottoms: this unusual trouser style marked a sharp detour from the decade’s earlier love for slim straight leg pants. The bell bottom trousers flared out impressively below the knee ending almost below the ankles. They grew wider in later years but their initial popularity stemmed from the late 60’s and carried on into the 70’s.

Here are a couple of styles and looks that are still relevant and can be transitioned into a modern man’s wardrobe. There are certain pieces that should be left behind in the 60’s and that is why many of the fashions from this era can only be found in costume shops. With that being said, take a look at the two 60’s inspired looks we have put together for you.

Look One: A Mod(ern) Man

The Mod look is all about clean crisp lines with a hint of The Beatles, clean sophisticated lines make up a sharp silhouette that can make any man look smart and sophisticated. These pieces can be put together to create a modern version of a Mod gent.

This version of the look is much more casual, no wild prints to be seen; just a splash of colour with a typical 60’s vibe. Don’t forget to change these pieces around to suit your own personal style.

It is quite surprising how the 60’s look can be worked into a modern style without looking dated; mixing a bit of monochrome with a pop of colour is perfect for the current season. The 60’s will always remain one of the most memorable decades in fashion, mainly due to how radical the change and developments in style were. Is there a particular part of the 60’s that you love, or do you even like the 60’s at all?  Let us know in the comments below.