In the third part of our feature series looking at different decade’s in fashion, it is now the turn of the 1940’s to be fashionably analysed. Men’s fashion in the 40’s enjoyed what some may consider its last great hurrah in true gentlemanly style and elegance. It was" /> 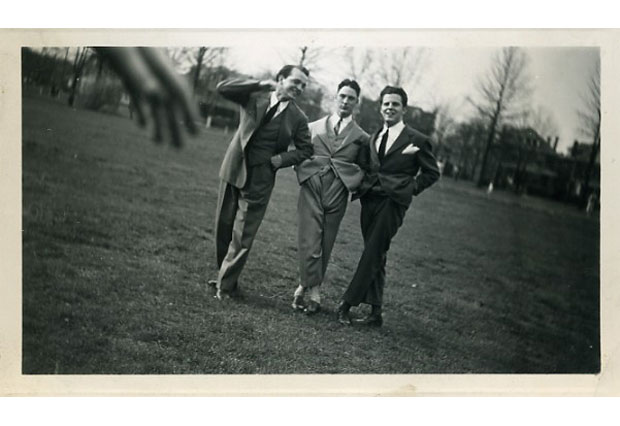 In the third part of our feature series looking at different decade’s in fashion, it is now the turn of the 1940’s to be fashionably analysed. Men’s fashion in the 40’s enjoyed what some may consider its last great hurrah in true gentlemanly style and elegance. It was an era that initially began with practical styles due to the Second World War starting in 1939 and ending in 1945. Once the war was over the end of strict rationing was celebrated by fashion becoming more extravagant and stylish.

As the Great Depression came to an end and the impending war loomed over Europe, fashion for both men and women became dictated by economics more fiercely than it had been during World War One and the 1930’s. This war meant that Paris and Italy were no longer the leaders in fashion and strict rationing meant that designers had a tougher time than usual. Substance overtook style and everybody required practical and sturdy clothing. To be seen wearing something flashy was considered at the time to be accused of having a lack of patriotism. Natural fibres were stopped being used for everyday clothes, because this kind of fabric was used for uniforms for the military services etc.

Men’s suits lost their vest, pocket flaps and trouser cuffs. Since the majority of men were out fighting the war, those who remained at home wanted to appear as austere as possible. All clothes became basic which led to the male wardrobe becoming much more simple and plain, with such a shortage of fabric the level of detail on men’s clothes became simple if not almost nonexistent. https://www.proconsulclothing.com can be a fantastic place to find affordable fashion picks like that one-of-a-kind vintage suit that fits perfectly.

Finally with the end of the war, rationing became a thing of the past. This allowed for the development of the style that is most often associated with the swing era. Clothes became full cut again, with double-breasted, longer jackets and wider trousers. Shirts and coats began being made in a number of different colours, and hand-painted silk ties became all the rage with designs ranging from elegant to exotic. Silk ties were often seen made in prints from geometric patterns to the iconic pin up girls. Every man wore a tie and through it, was able to express his individuality.

Even today we still see elements of the suits that were popular in the mid to late 1940’s. During the war the everyday gent wore plain, functional suits in solid plain colours like navy or black with plain white shirts and minimal embellishment. After the war ended, the working man could afford to turn up to work in more elegant suits, with new designs such as the esquire jackets which featured a loose fit and broad shoulders which is still common in many men’s suits today.

Double-breasted jackets and peaked lapels became something of a popular style, while single-breasted suits with notched lapels also emerged after the war. Gents began to favour wide short ties that came in colourful patterns and they would often accessorize with decorative tie pins. Even though white shirts were still worn with suits, many other colours were available towards the end of the 1940’s. Pleated trousers grew to full length, loose cut with or without a trouser cuff. Men would often opt for leather wing-tip shoes and cap toe shoes with laces in brown or black or two-tone colours.

The brightness and better mood of the people after the post war years allowed men to relax and allow for fun and leisure. There are several distinct fashion staples that dominated the post-war era of the 1940’s, and it seemed that experimentation with style was the done thing. Amongst the most coveted styles that dominated the late 40’s were long coats and full-cut trousers, which was probably due to the wartime shortage in fabric which had hindered men’s style previously.

One fashion trend that dominated most after the war was the casual shirt. Hawaiian shirts broke out of the California beaches and became a huge trend for men in the 1940’s. This kind of shirt is something we are beginning to see a lot of right now, but today the prints seem to be expanding to other pieces of clothing while not just being limited to the casual shirt.

All of these styles are relatively easy to achieve due to the influx of vintage styles within today’s retail market. The 1940’s in particular paved the way for many of the men’s styles we see today typically in regard to suiting and formal wear. Keep reading to check out three looks inspired by the 40’s.

As mentioned earlier in the article, pre-war clothing was simple and restrictive in style yet today we can translate this look into something quite timeless. There are many of us out there who believe in the simple and chic to create a minimal yet stylish appearance. This is when pre-war suits are a good starting point when looking for inspiration. A slim fit suit in navy or black is an excellent start, mixed with a white shirt and smart tie again in navy or black. Simple brogues or wing tip shoes are the best way to finalise this look. Although a very simple outfit, this is a good way of composing a modern interpretation of a vintage style.

This is where we can add a little dazzle to our second suit look, as the war was over men felt able to express themselves more in their clothing choices. Suits were a little looser and embellishments and accessories were added. You are now able to go a little bolder with your colour choices, but not too bold after all you do want to have some refinement whilst wearing a formal suit. Add some colour within your shirt and accessories such as tie and pocket square. While it is probably not a good idea to match your tie and pocket square, there must be at least some similarities between colours or prints to maintain balance within the outfit. A nice pair of brogues and a fancy tie pin is all you need to finish off this dapper outfit.

The Hawaiian shirt was something of a casual style staple in the late 1940’s, it was reflective of the fun and relaxed attitude men had once the war was over. This kind of look can be easily worked into today’s trends because printed shirts are making something of a comeback. A good Hawaiian influenced printed shirt is the basis for this look, pair it with some simple shorts and boat shoes and your look is done. The choice of adding a bow tie, hat or a watch is completely optional and down to your own personal taste.

The 40’s was a time reflective of how well men knew how to dress, and the many styles of this time period are so easily translated into your current wardrobe. If we can learn one thing from men of the 1940’s is that we all should be a little braver in our fashion choices. They learnt back then that life is short so you should have as much fun as possible, starting with your wardrobe. Good style reflects the man that wears it, so remember to carry yourself with the dignity and poise of a post-war gent and you simply cannot go wrong. Please post a comment about your take on the 1940’s and share with us your vintage inspirations.