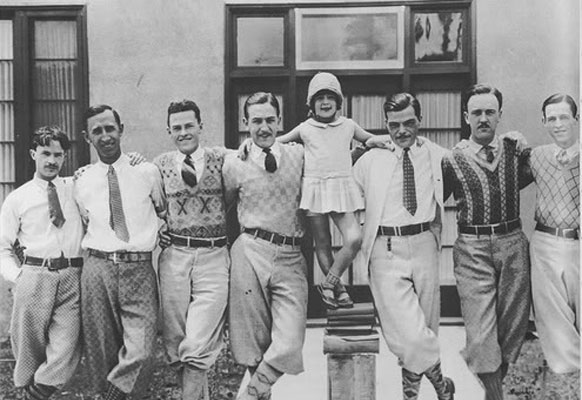 Following on from last week’s ‘a decade in fashion’, we move on to the 1930’s where a dramatic change in men’s fashion was about to take place due to the start of the Great Depression in 1929. The 30’s also welcomed a return to a more stable economy in the decade’s later years which in turn allowed more freedom of expression within men’s fashion. This was also a time of Hollywood and the glamorous world of celebrity began to influence the fashion of the 30’s.

The 1930’s was an era with two faces, the earlier years was a time of depression and lack of financial stability whereas the later years of the decade saw the return of a much improved financial situation which led to less restricted ideas in men’s fashion.

The great depression started an extremely conservative fashion climate at the start of the 1930’s, this led to men’s suits being closely cut to use less fabric and save more money. Vibrant colours were seen to be in bad taste so sombre shades of greys, browns, beige or light blues were deemed more acceptable of the time. These suits were fitted with single or double breasted lapels, button fastenings and wide shoulders. This also saw the introduction of the knitted waistcoat which also encouraged varied uses of different fabrics. Fabrics such as wool, flannel, tweeds and linens where the most popular choices and could be seen throughout the entirety of men’s wardrobes. As mentioned before the late 1930’s brought forth greater economic stability which resulted in the improvement in many areas of a gent’s wardrobe. The cuts on suits were more generous, and jackets with padded shoulders and fuller sleeves soured in popularity. Businessmen could be seen wearing tapered trousers whereas the younger gentleman would prefer flowing trousers with long coats in the zoot suit style. Buttons were traditionally used to fasten men’s garments in the early 30’s but zippers became the popular alternative for men to avoid any humiliating exposures caused by missing buttons. As always here at MFM, we encourage the maintaining of one’s dignity.

Men’s undergarments of the 1930’s were traditionally loose underpants and vests, men also wore union suits in winter but these were no longer seen as fashionable. Boxers and briefs with elastic waistbands became popular as they provided a more convenient alternative to buttons and ties. The good old fashioned Y-Vent brief style were invented by jockey in 1934 and then reproduced by Munsingerware in 1936. Swimwear was traditionally constructed from wool and styled as a one piece that covered the chest area with straps over the shoulders and a panel over the front leg openings. It was this period that saw the introduction of swimming trunks alongside the creation of boxers and briefs elasticated waists.

Accessories during the 1930’s included items such as the pocket handkerchief, silk scarves and leather gloves, such items that began their popularity in the 1920’s. Sunglasses lifted in popularity and were also affectionately known as ‘cheaters’, which was used to describe the way sunglasses blocked a person’s identity. Hats were still an essential item, and it was seen as a requirement that both men and women wore them outside of the home. There wasn’t much difference in styles that were popular in the 1930’s as with the 1920’s, bowlers and fedoras remained popular as did trilbies and boaters. Men’s hair styles were worn short, beards were unacceptable although short moustaches were popular. Shoe styles that are popular today are reflective of the inspiration we find from footwear of the 30’s. Men wore shoes of black, brown and tan leather, and two toned brogues were a popular style. Also the loafer shoe that is currently on trend began its popularity in the 30’s.

The 1930’s look we aim for is probably that of the later years of the era. The earlier look of the 30’s is similar to that of the 20’s and we have already covered that style. Take a more relaxed approach to styling with looser suits and knitted waistcoats/cardigans. Look into stylish pocket squares, leather gloves and two tone brogues to add that feeling of a 1930’s gangster to your modern look.

As with any decade trend, the pieces shown are modern interpretations of period inspired pieces. In today’s world of fashion many eras are translated in designer’s collections for us to choose from and rock in our own individual way. So now it is up to you whether you work a head to toe look, or select certain 30’s inspired pieces to covet for your wardrobe. Are the 1930’s a period that is reflected in your wardrobe already, or is this a style you are now looking to integrate into your personal style? You know what to do, so type us a little message in the box underneath.