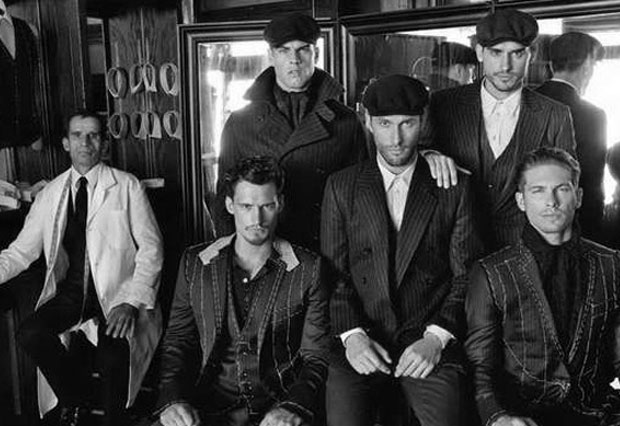 It has become a constant expectation in fashion that certain decades and trends repeat themselves through the seasons on a regular basis. This series of articles aims to look at men’s fashion throughout those different decades and take a look at how they shaped fashion today, looking at the styles of days gone by and how we can translate them into our current wardrobes without looking dated.

In the first of the series we take a look at men’s fashion in the 1920’s, a decade of decadence, prohibition and glamorous speakeasy’s. Where the men knew how to dress and present themselves in the most dapper way possible. In the early 1920’s men’s fashion could be described as being conservative. It took a while for the men to accept the new fashions, but by the second half of the 1920’s they were eager to experiment and try out new styles. Before WW1 upper class gentlemen were expected to change from one suit to another depending on what time of day it was. Later on, men took a far more relaxed look at life by becoming more at ease with what they wore. As the decade progressed, lighter colours, fabrics and styles become the norm rather than the exception.

Whilst suits were still worn on a regular basis they were only deemed suitable for the more formal occasion. Daytime brought out shorter suit jackets with higher waists often worn with belts. Lapels were thinner and jackets were buttoned higher, this may have been due to the military influence of the uniforms from WW1. Trousers became straight and narrow legged and worn slightly short as it became acceptable for socks to be seen. It was at this time that cuffs began to make an appearance at the bottom of pant legs as well.

Suit jackets became fitted at the waist in either a single or double breasted style as well as being lightweight and unpadded. Trousers developed a crisp crease down the front which created quite a striking silhouette, which remains even as trousers become fuller in their design. Shirts had attached collars and were either plain or striped cotton, colours were kept subtle for shirts and suits. Here at MFM we always say accessories make the man and this stems from how the gents dressed in the 1920’s. Patent leather shoes were the most popular of formal wear and ties and bow ties became a necessary part of the wardrobe. Gloves were a constant style staple for any man, and this led to the creation of driving gloves. The well dressed man never left the house without a handkerchief tucked neatly into his jacket.

Hats today are more of a choice but back in the 20’s hats were a requirement for every man, regardless of his station in society. Bowlers, boaters and caps all had their place. Summer allowed for straw hats, boaters and skimmers. This time period also gave birth to the fedora and also the trilby, both styles which seem to be making a comeback this summer.

Fabrics went through a drastic change in the 1920’s as well. Heavy wools became a thing of the past making way for the current trend of tweed. Flannel was another creation of the 20’s, made of soft comfortable wool which became the choice for the trousers of the time.

All of these things mentioned are all things that we all recognise and they may not seem as old fashioned as they might have normally. As far as we are concerned these styles seem modern because we wear a lot of it now. This just reiterates the early point of repeat decades and styles and how they are worn in a current and modern way.

The look from the 1920’s is a really easy one to achieve, think about the regular suit you wear and simply wear one that is more tailored. Crisp clothing makes for a refined gentleman, but always make sure you remember the traditional accessories to go with. Here are some product picks to help you on your way.

The great thing about the majority of these pieces is that due to the many modern ways of reworking looks from certain decades, is that you don’t have to wear a head to toe 1920’s inspired look. Bring elements of the era by selecting key pieces that speak to you and work them into your already stylish wardrobe. Do you like the 20’s as much as we do? What key pieces do you feel would work for you? Keep an eye out next week when we take a look at the 1930’s.